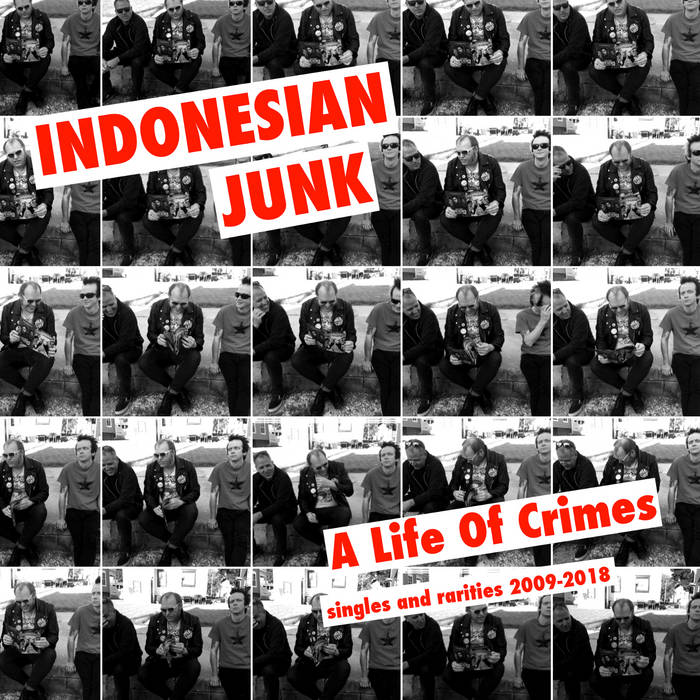 "This essentially functions as a fourth Indonesian Junk album. Like the other three, it's a killer mashup of street tough '70s punk, glam-inspired hard rock, and big hooky power pop with an additional touch of darkness and gloom. No other band gives you all of that at once!" - Faster And Louder

"They’ve managed to absorb everything that’s good and great from the last 50 years plus and pour it into their tunes covering huge Rock behemoths in the shape of Kiss and one for the cool kids in the shape of The Joneses whilst adding some glam Starz style to their punk rock old school of Slaughter and the Dogs." - RPM it's a Revolution

"13 titles including 3 unpublished, and that's good! Whether you already know the 3 albums of the group or not, here is something to delight your ears! Rock'n'Roll Punk, Glam, with some borrowings from the American Heavy 70's (Kiss, Ted Nugent, Grand Funk Railroad…). Songs stretched like a thong and full of melodies!" - Voix de Garage Grenoble

"What’s next for Indonesian Junk? The group is prepping a career-spanning singles and rarities collection, A Life Of Crimes, for a July 24 release. In the meantime, listen to one of the record’s previously unreleased tracks, “Pill Box,” now." - Milwaukee Record

"If this take on the joneses classic is a hint as to what’s on offer then get excited kids because Indonesian Junk has got it going on." - RPM Online

Yep, Indonesian Junk is back, and boy oh boy does it feel good!!

"Singer-songwriter Daniel James (along with bassist Johnny Cyanide and drummer Mike Mattner) is just so damn good at writing hooky, swaggering rock songs that every riff, every power chord, and every sneer feels fresh." - Milwaukee Record

"If you haven't been informed yet, take note now: Indonesian Junk is a rock machine! Don't be the last on your block to join the fan club." - Lord Rutledge

"It’s the late ‘70s and CBGB’s is bouncing. Outside, a punk rock street urchin oozes effortless cool as he leans against a lamp post; alternating an exhale of cigarette smoke between the chewing of bubblegum. His leather jacket and skinny ripped jeans smell of last night’s bourbon and Coke. He has no name, but if he did, he’d go by the nickname Indonesian Junk." - Mass Movement

"There’s some Indonesian Junk going around the streets of Milwaukee and it seems to be causing a bit of a glam punk riot. Full to the brim with punk attitude, pop hooks, and a rock ‘n’ roll swagger." - RPM Online

"I reckoned I was going to be spot on when I said that these three men are the last gang in town of NYC punk rock. But, then the scamps aren’t even from NYC. They are from Milwaukee in the Midwest." - Maximum Volume Music