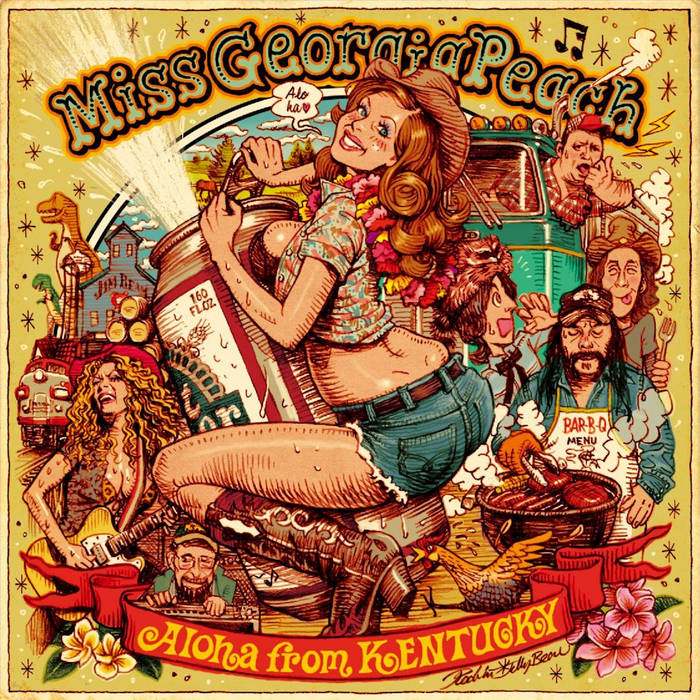 "This collaboration between Beebe Gallini leader Miss Georgia Peach and the members of Nashville Pussy is the rawkin’ country/soul record we’ve been dying to hear for many years." - Scott Hudson, The Ledge

"Anyone seeing the Pussy names and thinking this is some kind of heavy rock/C&W cockfight, fear not. While classics like Johnny Cash’s “Jackson,” Loretta Lynn’s “Don’t Come Home a Drinkin’,” the much-recorded “Silver Threads and Golden Needles,” even Ike & Tina Turner’s “River Deep, Mountain High” certainly get a rock & roll turbo charge, every tune is treated with genuine respect – it’s clear everyone loves these songs for what they are, not what kind of hay they can make of them. The proceedings really find their rhythm when they take on tunes not as familiar as the obvious titans. Check out the raucous takes on Merle Haggard’s “Bull and the Beaver,” co-starring NPH singer Scott Luallan, and Conway Twitty and Lynn’s bopping “You Blow My Mind,” with Cartwright, as well as the frisky version of Wanda Jackson’s great “Stop Kicking Our Hearts Around. ” Possibly best of all, Miss Peach has a grand time opening the record with a C&W-ified version of Dutch glam rockers Bonne St. Clair and Unit Gloria’s “Do You Know What Love Means?” The musicianship is strong, the vocals are impeccable, and the spirit is infectious. All covers albums should be this good." - The Big Takeover

"Aloha from Kentucky isn't your parents' music -- it's your grandparents' music! And that makes it five times as cool. This album is right in the wheelhouse of 1960s and '70s country music with a rock and roll edge. 12 of 15 tracks are covers, and the song selection is formidable. MGP and friends serve up stellar renditions of songs made famous by the likes of Loretta Lynn, Merle Haggard & Leona Williams, Jeannie C. Riley, and Johnny Cash & June Carter. A full third of the covers are drawn from the catalog of Wanda Jackson -- one of the greatest of all the country rock and rollers and undeniably a major influence on this album." - Lord Rutledge

"Over the years, MGP has proven herself adept at musical genres ranging from punk to garage to hard rock to rhythm & blues. On Aloha from Kentucky, she sounds like she was born to sing country music. Over the course of this record, she's everything you want a singer to be: tough, tender, sweet, sassy, fun, and feisty. Whether she's belting out classic feminist country anthems like "Big Iron Skillet" or "Don't Come Home A-Drinkin' (With Lovin' on Your Mind)", showing her flair for storytelling on "The Back Side of Dallas", or tearing your heart out on the tearjerker originals "Adam Neal Waltz" and "Don't Stay Away", she sounds 100% in her element. The covers show great respect for these songs' classic versions without being straight copies -- an example of what you can do with great material, exceptional musicians, and a dynamite singer. The original songs are strong enough to fit right in, and honestly t he album would not be the same without them. Standout cuts are hard to identify because every song seems essential." - Faster And Louder

"You've got to have some kind of voice to even think about covering this song, but of course MGP is up to the task! She absolutely crushes this song, which she and her all-star supporting cast rock up quite a bit. This, my friends, is how you do a cover tune! For those unfamiliar with "The Back Side Of Dallas", I won't spoil the song for you. I'll just say that if you hate newer country music because it's too lightweight, this should be way more to your liking! And with the '60s/'70s era of country music being my favorite, I'm psyched that it's going to be such a big influence on Aloha from Kentucky! It's a long way to Dallas for a small town girl from the middle of Tennessee..." - Lord Rutledge

What happens when two legendary musical acts collide head on in the wilds of Kentucky? This is a tale of the time that punk rocker turned country queen Miss Georgia Peach tangled with the revved-up jesters of raunch, Nashville Pussy.

With an uncompromising commitment to sleaze, Nashville Pussy have remained the high voltage mark for all that is incendiary and boogie-fied in a world gone beige. Their credo can be summed up in their one minute and fifty-nine second masterpiece, Go Motherfucker Go. Not only an instructive call to arms, Go Motherfucker, Go is an empathetic hand on the shoulder for hell-raising miscreants everywhere.

Inspired in equal parts by Dolly Parton and Patti Smith, Miss Georgia Peach has carved a punk rock career for herself fronting several quality acts, ranging from the Gloo Girls to the Short Fuses to Beebe Gallini, among others. With a longtime itch in her soul for straight ahead country music (with a hint of debauchery), Georgia sought out longtime pals Nashville Pussy for a possible collaboration. Knowing Georgia and her sweetly aggressive pipes, Nashville Pussy couldn’t agree more and soon rehearsals for the greatest pairing since Harley met Davidson, commenced at Pussy Manor HQ in Atlanta, GA.

Furious rehearsals, pinball and home cooking led to an equally frantic van ride to Brian Pulito’s recording studio located deep within the state of Kentucky. It was a session that afforded little time for screwing around. Marshalls were cranked, tape was unspooled and Georgia and company hunkered down to business. 9 Pound Hammer bassist Mark Hendricks fell right into the proceedings along with Scott Luallen, also of 9 Pound Hammer fame, who sings with Miss Peach on Bull and the Beaver. Local pedal steel genius Fred Sexton lent his immeasurable talent as well on several numbers. With esteemed producer/drummer/cat wrangler Travis Ramen at the helm, the guilty parties knocked out hit after hit after hit of standards and soon-to-be standards.

You now hold in your sweaty mitts the distilled fruits of that labor. It’s Nashville Pussy at their most melodic and vulnerable matching musical wits with Miss Peach’s sweet, sultry snarl. The material chosen to cover mixed with fresh originals will reel you in only to toss your ass back out on the street where it most likely belongs.

Crunched-out country soul never sounded like this. The deep-fried combo of Miss Georgia Peach and Nashville Pussy will deliver the one-two punch to both of your ear holes and to some of your most important internal organs. One spin and your new permanent salutation will be Aloha From Kentucky, Motherfucker!

—Dave the Spazz, Music To Spazz By, WFMU

Rockin Jelly Bean Cover art:
The incredible cover art for Miss Georgia Peach’s “Aloha From Kentucky” was years in the making, going back to a shared gig in Osaka Japan where MGP and Travis Ramin crossed paths with the artist and musician known as Rockin’ Jelly Bean. After post-gig partying, they promised to make art together some day, and Folks, that day has arrived. Feast yer eyeballs on the titillating storytelling cover art of “Aloha From Kentucky”, with every band member hand rendered in their natural habitat and odes to Kentucky abound. MGP is so honored to have RJB create her first album cover. These are some words, but really, there are no words to describe our love and gratitude for this gorgeous piece of art.

“It reminds me of R.Crumb’s art for Janis Joplin’s Cheap Thrills combined with 80’s Sex romp movie ‘Porky’s - It’s both sexy and funny- which is not an easy combination.” -Ruyter Suys

The artist goes by "Rockin' Jelly Bean" and is known to wear a custom Luchador mask to hide his identity. During public appearances, the mysterious artist will have at least two RJB girls at his side. Influenced by artists such as Ed Big Daddy Roth, Robert Williams and Von Franco, RJB is known for his Low Brow "lascivious and wildly imaginative depictions of beautifully nasty and cutely obscene women".
RJB's career began in Tokyo in the early '90s designing gig flyers for local bands. By the late '90s, he moved to LA and released EROSTY POP; a label featuring wearable Rockin' Jelly Bean merchandise. His first shop, EROSTIKA, opened its doors in 2004 where you can shop original prints, apparel and toys. RJB's racy artwork is shocking and playful. An international audience of cult fans continue to collect his work not only for the "boobs and butts" but the hidden messages he likes to include in his work.