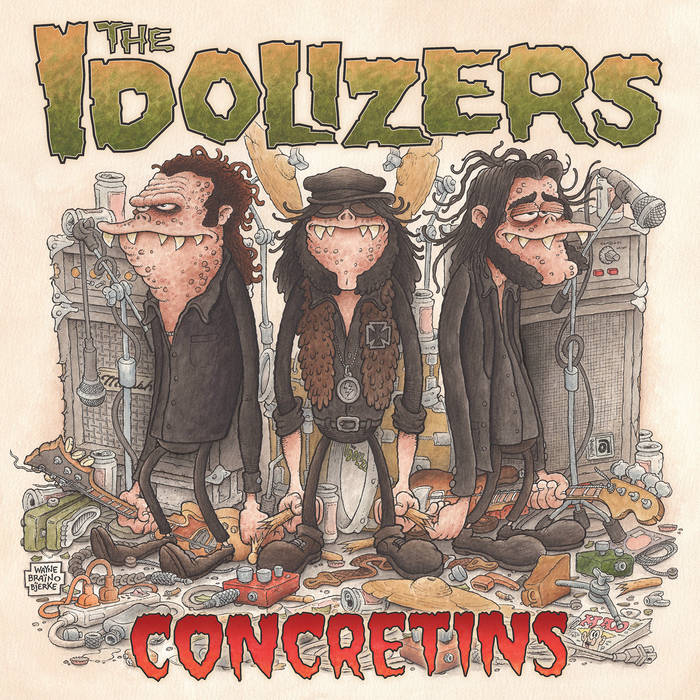 "ConCretins features seven tracks of gritty, high energy rock and roll steeped in the sounds of '77 and its musical progenitors (Stooges, New York Dolls, MC5). The very essence of New York City comes oozing out of every note these guys play. This, my friends, is real deal punk rock and roll. Crank these tunes loud and let the world know that you are not to be messed with!" - Faster And Louder

"“ConCretins” is their second album. I reviewed the first last year and rather excitedly called it “a masterclass in rock n roll”. Anyone, it could be argued, has one good album in them, great bands have two. The Idolizers, then are a great band. The seven songs here, are a jam packed 20 minute thrill ride, through a street marked with names like Hellacopters, Wildhearts, Stiff Little Fingers, Ramones and a host of brilliant power pop." - Maximum Volume Music

And what is more, blaring out of the open windows in our mythical streets are songs that basically scream: play loud and often.
"The Idolizers CD is even better than I thought it was gonna be! TOTAL Punk Rock & Roll! Those guys could have EASILY come out of NYC 20 years ago!" - Ralph J. Rivera, The Switchblade New Wave

"A worthy follow-up to last year’s self-titled introductory EP, the Idolizers rip it up again on new EP ConCretins. (Yes, we see what you did there.) The NYC trio kicks it off with the appropriately titled “Action!,” a catchy, hard-rockin’ blazer that’s equal parts Detroit snarl and Rockford fistpump. It’s as quintessential an Idolizers song as you can get." - Michael "Denim" Toland, Big Takeover Magazine

"You don’t really need to know much about this band apart from the obvious fact that they’re the real deal. Play this loud and often!" - Fear And Loathing Zine

"Punk'n'Roll at it's best! 11 songs (with the bonuses in download) that know, mark your little brain, make jump in the air and shake your head and sing the choruses like a moron (of course) like your favorite classics!" - Voix de Garage Grenoble

"Whole album already made my chart!" - Boris aka The Secret Weapon radio Show on Woody Radio

A little mini story of the challenges of putting a record together during this pandemic. Balancing Our ambition vs safety precautions. The feel of the growth of the band as a big step forward from the first release. The hunkering down and really honing the new material to present an even tighter musical unit, especially given the departure of one member. The amount of songs that were surprisingly in a more powerpop direction yet even more rockers to come! Stay tuned for more Rock n Roll. This is The Idolizers. Their sophomore release is ConCretins.

With influences brought up on the bedrock of garage, power pop & punk from Generation X, Stiv Bators-Disconnected, Hanoi Rocks, The Wildhearts, 999, The Boys, Paul Revere's Raiders & The Stooges. CONCRETINS, the sophomore release from NYC's The Idolizers is filled with big hooks, choruses, a thundering rhythm section and wall of guitars that pulls you in right to that time and place where you heard one of those influences for the very first time. Featuring the lead single "Riot Radio" hitting indie radio airwaves all over, get ready for some serious cranking up!!

"It's like all my influences thrown into a giant mixing bowl!" - The Ledge, Real Punk Radio

"Just let yourself think of the MC5 re-assembled via The Heartbreakers, possibly with hints of The Boys and, more recently, The Briefs." - Fear And Loathing Fanzine

"Embodying the spirit of The Stooges and New York Dolls, The Idolizers still maintain their own infectious punk/garage/glam sound. These real deal punk rockers hit us from every angle with soaring vocals, crunchy riffs, blistering leads, and thunderous percussion. There’s no doubt you’ll have your stereo cranked up to 11!" - Uber Rock

Rummaging around the ruins of 50's Rock n Roll, 60's garage, 70's punk and glam, like a miner panning for gold among the dustbins of history, they come blasting out of New York City with the kind of hook-filled tuneful punk you haven't heard in a while. Conjuring 77 Punk, 78 PowerPop, the dirtiest Raw Power Stooges. MC5, Heartbreakers, a dose of glam and the pop songwriting sensibilities of the Raspberries meets the early Who. Featuring a few grizzled veterans and a few fresh faces with deep roots in NYC and New Jersey Punk and garage rock.
The Idolizers wear their hearts on their sleeves and their switchblade combs outside their pants. Too tough to die, too hip to be controlled, too streetwise to be controlled....Forever in thrall to the Idols on our wall, The Idolizers!