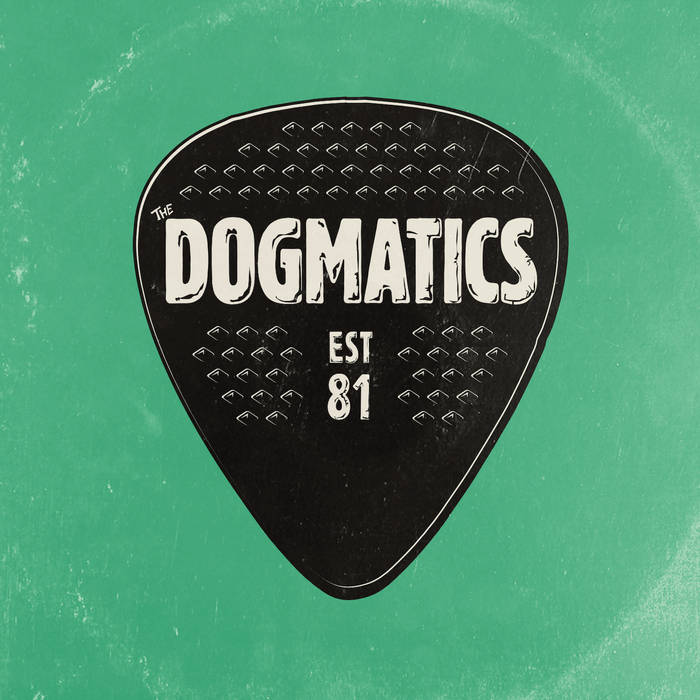 pegarina Sister Serena will always be my favorite Dogmatics tune. It’s the first song I heard from them and I’ve been a fan for over 30+ years. Favorite track: Sister Serena.

This collection is dedicated to Paul.

The Dogmatics "EST 81" (formerly Dogmatics 1981-86) officially available on CD & digital format for downloading, streaming, and cranking up to your hearts content for the first time in years!! Now includes the long out of print classic "X'mas Time (It Sure Doesn't Feel Like It) in audio format for the first time evah'!! Stacked with 21 Tracks of historic Boston Punk Rock n' Roll.

"This stuff is indeed timeless and sounds fresh out of the garage years later. 'Music that deserves to be heard indeed'. Be generous with the volume as these 'Dogs' go to 11! 'Their bark equals plenty of bite.'" - Boris "The Secret Weapon" on Woody Radio

"When it comes to all the fabled punk rock scenes of "back in the day", I'd probably take Boston over New York, Detroit, Chicago, San Francisco, or even L.A. And my favorite Boston band, by far, would have to be the Dogmatics. To me, they're pretty much the definitive Boston garage/punk band. The Dogmatics produced more legendary songs in a six-year period than most bands turn out in decades. Originally issued on CD by Shredder Records in 1995, Dogmatics 1981-86 is one of the all-time essential compilation albums. It's a must-own for anyone who reads this blog or digs the kind of music I write about. Seriously: I'm giving you all 30 days to acquire it. There will be inspections." - Lord Rutledge, Faster And Louder

"I used to do a radio show in the Eighties on Saturday nights, 9 til 1, and I'd start every show with "Saturday Night Again" by the Dogmatics. Both of their recordings "Thayer St." & "Everybody Does It" (included in this collection) are in my top five punk albums of all time. Stoked that you are reissuing these quintessential punk recordings by Beantown's best." - Renny Godier

Peter, Paul and Jerry met each other in the 1st grade at St. Matthew’s in Dorchester. They would endure 8 years of discipline together. Crazy, violent times forced many family’s out of Dorchester..The twins moved to Kingston and Jerry to Weymouth. They kept in touch during their high school years and couldn’t wait to get out of the suburbs and back into the city. Paul started a band with lifelong friend T.K, singer Skag, guitarist Sam Babbitt, and drummer Joey Olsen …they called themselves the Savage Beasties, a rocking band and the toast of the South Shore. This band would be the starting point for all of their future bands, T.K , and Paul moved to a loft at 8 Thayer st. in Boston. T.K co-founded “Spearhead Go” along with the gifted Barry Hall, B.C Kagan and Joey Olsen. Spearhead Go started playing out and recording, and they were the template that Paul would follow.

Paul enlisted his brother Pete, Jerry and Dan Shannon to start their own band. Pete and Jerry moved into the loft and started practicing. They would play their 1st show at 8 Thayer St. as the Guttersnipes with Spearhead Go! It was a great 1st show, but it was the one and only time they would play as the Guttersnipes. Pete suggested the Dogmatics and everyone agreed. The Dogmatics played their 1st show @ Cantones in 1981, they were honored to open on a Tuesday night for no money. They continued to play throughout Boston for the next year with drummer Dan Shannon who would leave the band for college. Longtime friend T.K suggested that we enlist Tom Long, the 18 year old drumming prodigy out of Squantum Ma., and so it was.

The Dogmatics would eventually end up playing every shitty little club and backyard party in most of the United States. This did not deter them. In 1984 the Dogmatics would release their 1st and only single to date on their own label “Cat records”.

Gimme the Shakes on the A-side and the Eddie Cochran classic “20 Flite rock” on the B-side. In 1985 the Dogmatics signed with Homestead Records and released their 1st album “Thayer Street”. “Everybody Does It” was hatched in June of 1986. “Teenager on drugs” was released on the “Mr. Beautiful” compilation. “Teenage girls” on the “Rock turns to Stone” compilation.

The Paul O’Halloran penned classic “It sure don’t feel like Xmas time” was featured on the “Midnite Xmas Mess” compilation. In 1998 Shredder/Vagrant would release the Dogmatics 2 lps along with some previously unreleased tracks. The Dogmatics songs have been recorded by Boston’s own Mighty Mighty Bosstones, New Orleans prankster’s Dash Rip Rock, The Pussy Willows, Heap and Swedish garagepunk kings “The Locomotions”. On October 23rd, 1986 Paul O’Halloran died in a tragic motorcycle accident. The Dogmatics have done numerous reunions since 1986 with brothers Johnny and Jimmy O’Halloran sharing the bass duties. Paul O’Halloran is loved and missed to this day.