For Those About To Pop! 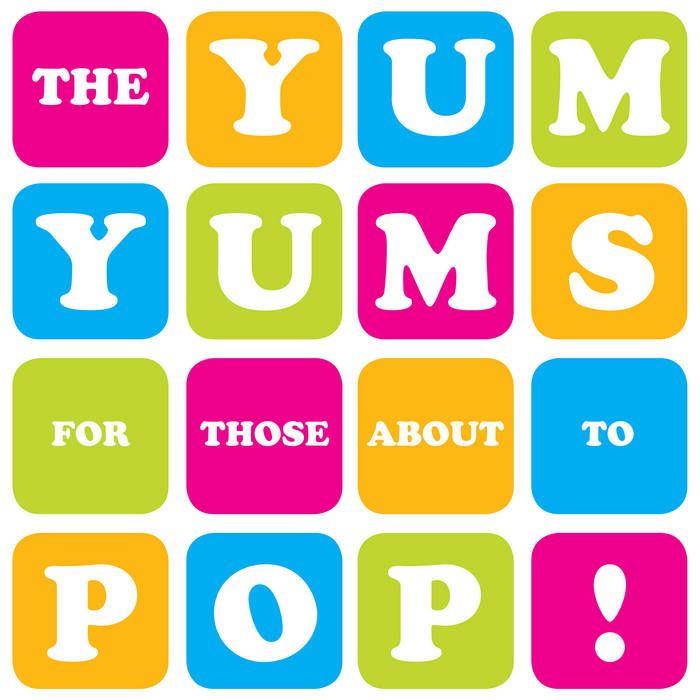 Mark Cousens Classic powerpoppunk from the Norwegian legends. As good as anything else they've ever done. Favorite track: Crush On You.

cmylenz The Yum Yums return with some of the sweetest bubblegum punk ithat it makes your teeth hurt!!! Favorite track: Bubblegum Baby.

statusquo12 Simple and catchy pop....you cant stop your head moving up and down :) Favorite track: For Those About To Pop.

"Simple, speedy and satisfying power pop that comes across like The Archies and The Beach Boys collaborating with The Ramones in Greg Shaw's basement." - John M. Borack, Goldmine

"For Those About To Pop! is a phenomenal album and a marvelous, loving valentine for power pop fans everywhere." - John V's Eclectic Avenue

"It's the best of power pop and punk and glam rock and bubblegum blended into a non-stop parade of oughta-be hits. It's one of the most "pop" albums ever made and the ultimate summertime record." - Faster And Louder

"Imagine if Dee Dee and Johnny joined The Sweet and you’ll get the idea. For Those About to Pop! is a power pop-glam hybrid with gummy sing along choruses and a Ramones guitar punch, all performed with an infectious enthusiasm." - Power Pop News

"For Those About To Pop! is one of the best pop records I’ve heard in years." - Colin's Punk Rock World

"Rodney's in love with the yum yums." - Cindy Kona

"Refrains, hooks, riffs, melodies, backing vocals full of "Wha Whaoo" and whatnot… all of this we know, but the Yum Yums put it together so much better than everyone else !!!" - Voix de Garage Grenoble

"I listened to it yesterday. Quite impressive. Vocals are amazing." - Jerry Lehane, The Dogmatics

"This is not just the best album The Yum Yums have ever done (and they’ve done some ace ones, this is just more ace, so to speak) it is one of the albums of the year. Hands down. It might be a little too on the nose to say “For Those About To Pop” I salute you. But you know what, I am going to do it anyway, because that’s what it deserves." - Maximum Volume Music

"The songs on For Those About To Pop are infused with the force that was the hallmark of The Ramones and the early Undertones, but The Yum Yums take theses classic’s sound image one step further. Just have a listen to the title song, Bubblegum Baby or Summertime Pop and you will see what I mean." - Pop Diggers

"The Yum Yums unleash a host of great pop tunes on the world. Pop tunes of the kind that take one listen session to be able to sing along to. Everything is done just right. From The Beach Boys to Blondie can be found here. Just like the best songs of those two bands the songs on For Those About To Pop! demand immediate attention. I just want to listen and undergo the songs fully. Be immersed by them and become one with them." - WoNo Blog

"And let me tell you: if you're a fan of The Yum Yums' previous four albums, you're gonna go WILD for this new one!" - Faster And Louder

"On Those About To Pop!, The Yum Yums have written a modern power-pop classic. By rights, these songs deserved to soundtrack summer nights the world around." - Louder Than War

"Power pop is a big tent. The discussion over what is and what isn’t power pop rages on. The Yum Yums are power pop in the tradition of one of its oldest genres, bubblegum, fused with punk energy." - Pop Geek Heaven

"For Those About To Pop! is the delightest kind of delightful poprock songs. This song in a certain sense makes the enamel on my teeth go pop causing it to crack, yet does everything so right." - WoNo Blog

"There are nods to everyone from The Ramones to 20/20 across the record, but the dominate influences date back to the 1970s Glam scene, with loud guitars, steady drums and mass singalongs." - New Noise Magazine

"We gotta tell you that this album is solid the whole way. It’s bubblegum punk. It’s fun and bouncy. All 14 songs are equally catchy. Like one and you like them all." - Boston Groupie News

"Great stuff! I’ve been enjoying their hook filled music for damn near a quarter of a century. This is no exception, perhaps their best work yet!" - Secret Weapon Radio

"Rodney said the yum yums are the new Beatles. Did you hear that??" - Cindy Kona, Rodney on the Rock

"For Those About To Pop! is so stacked with hits. Even better, this album feels like a statement. It's not just another Yum Yums album. It's the ULTIMATE Yum Yums album!" - Faster And Louder

"I had no knowledge of the YUM YUM'S until Rum Bar records sent me FOR THOSE ABOUT TO POP !, the first single from their upcoming July release. The sound harkens back to the glory days of pop..and I can't wait to hear the rest !!" - Skybar, WMFO

The Yum Yums are from Norway and have been playing, released records, toured and basically been arrogant powerpop-stars since 1993. .. This album is a tribute to The Yum Yums loyal fans, over 25 years!

The Yum Yums have been playing since 1994 (when their first single was released). Lead vocalist & guitarist Morten and the band have been working on this album for 6 years. Taking their time they have managed to make a good sounding album, filled with hooks, big loud guitars, drums, bass, and pop-punk anthems that include most of their influences: Power Pop, Bubblegum, mainstream pop and early 70s UK Glam Rock!

The Yum Yums wanted to put a little sunshine and fun back in rock’n’roll by combining the classic sounds of The Ramones, The Beat, The Rubinoos, The Real Kids with the sound of their heroes at the time: The Devil Dogs, The Vacant Lot, Psychotic Youth… and top it off with sprinkles of 60’s girl groups, surf and even a little bit of 70’s glam. This is still their patent for infectious power-pop today with today's instant classic... For Those About To Pop!