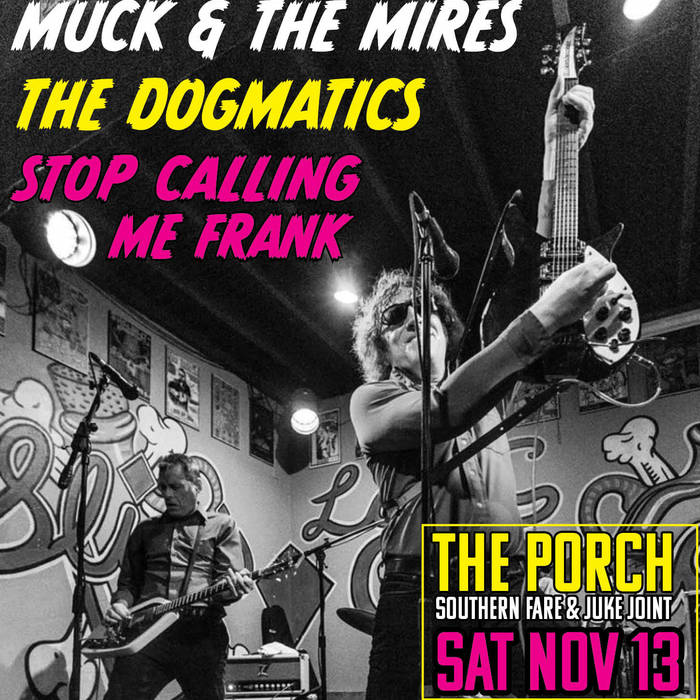 Friendsgiving Throwdown!
Muck and the Mires / The Dogmatics / Stop Calling Me Frank

Muck & the Mires:
Boston's MUCK & THE MIRES described as “a mix of the 1964 Beatles and The Ramones”. The group achieved worldwide recognition after they were crowned #1 US Garage Rock Band by LITTLE STEVEN Van Zandt in his battle of the bands on MTV. They have performed coast-to-coast in the USA, UK, EU, South America, Canada, Japan. And they have shared bills with many of their heroes including The Sonics, The New York Dolls, Ray Davies (The Kinks), The Flamin' Groovies, The Stooges, and even a Beatle - Pete Best!

Stop Calling Me Frank:
Born and raised on Stax, Motown, and Ramones. Direct from Boston, from the heyday of revered and legendary punk rock club The Rat, for fans of The Lyres, Barrence Whitfield, Scruffy The Cat. The Del Fuegos, Nervous Eaters, and The Real Kids. Brand new 7inch EP release "Hard Lovin' Man" with Fleshtones Keith Streng & Count Peter Zaremba out this November on Rum Bar Records!!

The Dogmatics:
"When it comes to all the fabled punk rock scenes of "back in the day", I'd probably take Boston over New York, Detroit, Chicago, San Francisco, or even L.A. And my favorite Boston band, by far, would have to be the Dogmatics. To me, they're pretty much the definitive Boston garage/punk band. The Dogmatics produced more legendary songs in a six-year period than most bands turn out in decades. Originally issued on CD by Shredder Records in 1995, Dogmatics 1981-86 is one of the all-time essential compilation albums. It's a must-own for anyone who reads this blog or digs the kind of music I write about. Seriously: I'm giving you all 30 days to acquire it. There will be inspections." - Lord Rutledge, Faster And Louder