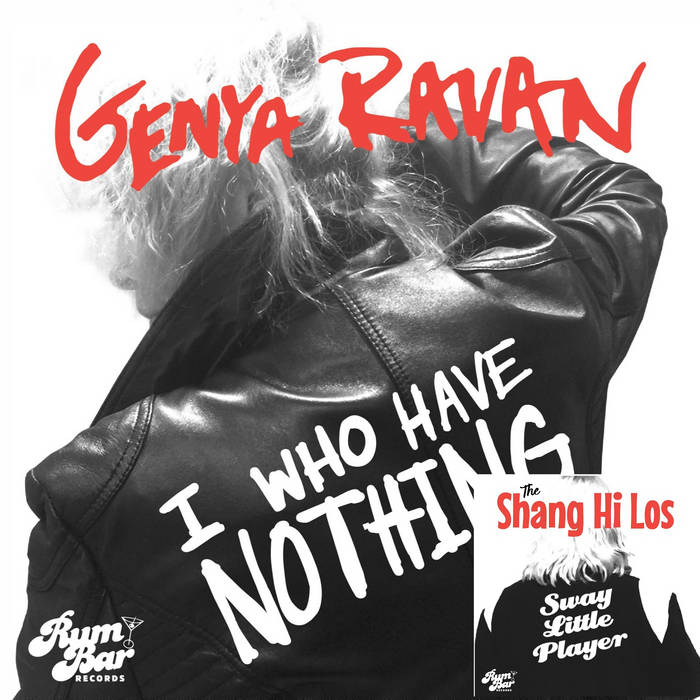 treehouserecords I got Sirius satellite radio for a free year with the purchase of my car. Little Steven’s Underground Garage plays this ALL the time, and it’s great---unlike much of the overly-derivative and boring mimics that Mr. Van Zandt apparently can’t get enough of it. The woman’s harmony vocals on the refrain are what hooked me...cool singer. Favorite track: The Shang Hi Los - Sway Little Player.

"Both sides are great. Genya with a totally fresh take on a classic and Jen and company with a sassy, struttin' duet. World class."
- Brett Milano

"Leading the charge is the unequalled first lady of Rock Genya Ravan. Beside Genya, and on the flipside (so old-school) is Boston based outfit The Shang Hi Los, together both forge the excellence of sound captured in this very fine moment." - The Big Takeover

"Now here's a dream team-up from the Rum Bar Records hit factory! Genya Ravan (Goldie & the Gingerbreads, Ten Wheel Drive) is a true legend of rock and roll. The Shang Hi Los were my #1 new band of 2020. Both artists share real estate on a new 7" release that Malibu Lou has been raving about to me for months. And let me tell you: he had reason to rave!" - Faster and Louder

"Genya Ravan’s “I Who Have Nothing” Melds Gold, Gravel, And Guts." - Bust Magazine

Genya Ravan - "I Who Have Nothing"

"First of all, your version of “I Who Have Nothing" is nothing short of a masterpiece. You have given the song a new life, especially the line “What a bitch! What a bitch!" Your voice has a different timbre to it, and it resonates like never before. Congratulations!" - Richard Perry

"Unbelievable OMG I who have nothing, you have everything! Wow"
- Michael Des Barres

"Let me say this once more? What a powerful single this is!" - WoNo Blog

Nile Rodgers guest player: "While Recording 'I Who Have Nothing'…..I thought Who better than Nile Rodgers to give me the genuine R&B Groove this song needed…I knew the guitar player for me had be 'Nile Rodgers! I sent him an email and he called me right back! I sent him the basic tracks and without hesitation, his reply was “Yes” he would play the rhythm tracks. Did he ever!!!!!I I admire him and all music he has ever played on. Example: Diana Ross -Madonna -David Bowie Joss Stone-Mick Jagger the list is too long to continue. If any one can ‘ Rock and Chug’ its Nile The proof is in this recording." - Genya Ravan

“What a fantastic idea this was to share a double Sided single “I Who Have Nothing” by me And one of my favorite singer’s (Jenny D ) Her band (The Shang Hi Los) with “Sway Little Player”. Hang On Cuz It’s Gonna Be A Fast Rockin Ride." - Genya Ravan

"What an absolute honor to share the audio stage with Genya Ravan - rocker, pioneer, survivor, legend. My road is easier because she rocked there first." - Jen D'Angora, The Shang Hi Los

"Genya and The Shang Hi Los - a split 7" made in heaven. Sharing the vinyl with Genya and Jen - two of the most iconic personas and voices in all of punk/pop/garage rock history - is truly my rock-n-roll dream come true!" - Dan Kopko, The Shang Hi Los

"I'm more than a casual fan. I've seen Jen D'angora(The Dents,The Downbeat 5, Jenny Dee and the Deelinquents), Dan Kopko(Watts), and Lee Harrington(The Neighborhoods),play live more times than I can count. I have all their records,they are among the best bands to come out of Boston !! So it comes as no surprise to me that when Dan, Jen, Lee and Chuck Ferreira formed the Shang Hi-Los...great thing would happen. It's a slightly different sound than anything they've done before but still fantastic !! The single Sway Little Player is just the start, get on board." - Skybar, Rising-WMFO

"Wow! When I heard that Dan Kopko (Watts) and Jen D'Angora (The Dents, The Downbeat 5) had started a new band together, I was 100 percent sure it would be great. But somehow the debut single from The Shang Hi Los is even better than I could have imagined. Boston does it again! The track is called "Sway Little Player", and it's the kind of rock and roll song you'll want to play on repeat all day (or is that just me?). Kopko and D'Angora are no strangers to any longtime follower of this blog. On "Sway Little Player", they share lead vocals and sound absolutely amazing as a tandem. They are joined by Lee Harrington (The Neighborhoods) on bass and Chuck Ferreira (Eddie Japan, Lonely Leesa & The Lost Cowboys) on drums - making The Shang Hi Los the latest in an endless line of Boston garage/punk supergroups. This particular track combines the spirit of late '50s/early '6os rock and roll with a cool punk/new wave edge (I'm getting huge Blondie vibes, which is never a bad thing!). Music doesn't get any more upbeat or catchy than this. If this song doesn't make you feel good about being alive, there is probably no hope for you." - Faster And Louder