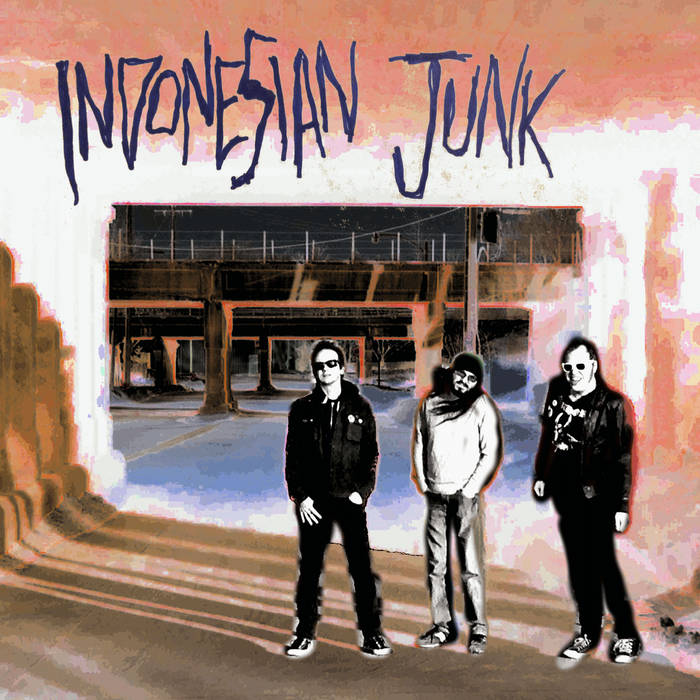 Big hooks and big riffs is what Indonesian Junk is all about. Hailing from the land of Lenny, Squiggy, and the Crusher this Milwaukee ménage à trois take the best elements of glam, punk, power pop, and heavy metal, while ditching the fluff to crank out 10 tuff street-pop shakers. They're both sleazy and sincere, pairing their hymns of damaged love with dangerous guitar heroics beyond the proficiency of mere mortals on their full length debut, brought to you by Rum Bar Records.

Indonesian Junk founder Daniel James is mostly known for his work in Ramma Lamma and Chinese Telephones, touring the continent and beyond for the past decade as well as having filled in with the likes of Nikki Sudden, Kepi Ghoulie, Nato Coles and the Blue Diamond Band, Kurt Baker, and Direct Hit. Enlisting the help of drummer David Barootian and bassist Johnny Cyanide last year, they quickly recorded their debut 45 “Crimes” and took their unpredictably wild live show on the road. Now they're back with ten more cuts of sick power-pop jams with an emphasis on the power. They'll get stuck in your head faster than a switchblade. Indonesian Junk is goin' around!

From founder Daniel James...
Stylistically I'm trying to combine my favorite elements of glam, punk, power pop, garage, and heavy metal. The songs are hooky, catchy, and earnest and have a take no prisoners, balls to the wall punk / metal approach. Our shows have been described as “unpredictable” and that's probably a good descripton. It's not uncommon for my guitar to wind up broken by the end of our sets as I've been known to whip it with a belt, ride it like a surfboard, throw it across the room, throw cinderblocks at it, etc.

My lyrics can get kinda wussy. What can I say? I'm a sensitive dude and when I'm feelin' down in the dumps and heartbroken, I like to write songs about it to help me get out of the funk. Sometimes I like to write fun silly songs about outerspace, and prehistoric monsters that wanna dance with you, and ESP and stuff though too.

I like big heavy guitars too with big riffy hooks, and bitchin' solos. Yeah.

Produced, engineered, and mixed by Daniel James at Truth on the Booth
Mastered by Matthew Melton at Fuzz City