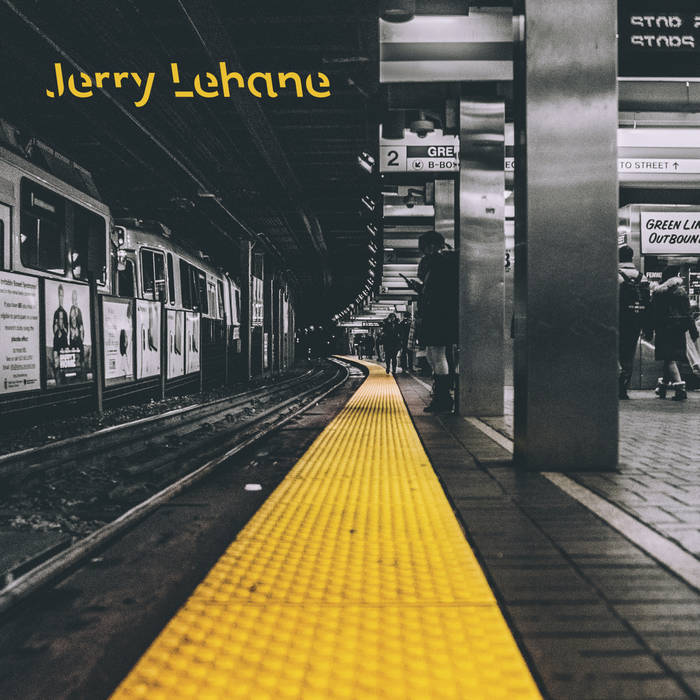 "It doesn't get any more "Boston rock and roll" than The Dogmatics. And today Rum Bar releases the debut EP from Dogmatics singer/guitarist Jerry Lehane. Incredibly, these recordings had gone unreleased for 29 years until today. Talk about an unearthed treasure!" - Lord Rutledge

"The garage rock, classic punk-spiked vibe here is pretty similar to the Dogmatic tunes: short, distortion-slathered tunes with boozy sing along choruses and hooks that stick with you long after then songs have stopped playing." - New Noise

"It's a cool noisy..and raw.. mid-tempo rocker. In the Dogmatic territory but a bit more energetic even!! We love the way it's loose. it starts with 10 seconds of amp hum, like they're in the studio waiting to let go. You can feel the way the guitarist just gets carried away in the solo. You want a real rock feeling…it’s right there with Kiss My Tattoo." - Boston Groupie News

"If you're expecting a Dogmatics feel, well there's certainly a little bit of that. You'll hear the guitars that open "Kiss My Tattoo" and instantly know who you're listening to. And the rocking and rolling "Fish" could easily pass for a lost Dogmatics track. But over the course of these five songs, Lehane covers a good deal of musical territory. "Kiss My Tattoo" is high energy garage rock, Boston style. "Runaway With You" is a Stonesy barroom ballad that Lehane's current label mate Tom Baker would be proud to have written. "All I Can Do" is twangy, aching, and reminiscent of the Replacements." - Faster And Louder

“This song kicks ass! The sound and the cover photo will take you to the Rat in Kenmore” - Medford Jim

"Crank this one up beyond 11! Guaranteed to blow the roof off of any joint!" - The Secret Weapon Radio

"This is a great tune! Check it out folks." - loyal fan and estimable customer, Jim Flynn

"Are my speakers broken? The first sounds come out as if the speakers blew up just before putting the album on. Luckily the answer is no, as the glorious sounds of 'Kiss My Tattoo' fly into my room, shake up my ears and jostle around in my brain a bit. The opening song was discussed in a post on singles recently but is so good that I do not mind to sing its praises once again. This song is so good. It rocks, it's dirty, it's glorious. The opening notes so fast the guitar player can hardly keep up. Jerry Lehane has created a monster of a song .... 29 years ago." - Wono Blog

It was 30 years ago today. Well, maybe 29 but close enough for rock ‘n’ roll and there’s that old Sgt. Pepper line we like to trot out and adapt to modern times.

Right around then, Jerry Lehane and some musician pals went in to a Boston studio on three consecutive late nights and banged out five songs, the very five you’ll be hearing on this here EP.

Listen to ‘em and tell me this, though: Don’t they sound like they could be freshly minted, straight outta today’s garage? Or, if you want to acknowledge the pedigree, maybe you could call ‘em vintage fresh.

Why are these out now?

Well, this batch was going to be part of a more extensive package with newly recorded material – a Lehane mashup of old and new for his first eponymous effort - but then COVID-19 came around and said “Fuck you, go home and isolate” to Lehane and, really, everybody else on the planet. Life was derailed and music, being a big part of life, took a hard hit. Gigs cancelled and recording plans scuttled.

Lehane had another three songs ready to record with Ed Riemer, the former bassist in Band 19 and Wheelers & Dealers, among others. Riemer, who’s also a carpenter and high-end reverb cabinet maker, met Lehane, who runs a plumbing company, on the day job. They got to talking music and recording in Riemer’s home studio. “He was gonna bring in other musicians,” Lehane says, “but COVID-19 came and it was kaput.”

Still, Lehane had this batch of five that he and Rumbar Records’ Lou Mansdorf wanted to thrust into the world … So, why not now?

“They were all done over three days in 1991,” says Lehane. He was, as they say, between bands. The Dogmatics, formed in 1981, had come to an abrupt end in 1986, when bassist Paul O’Halloran was killed in a motorcycle crash. (They have since re-grouped off and on over the years and play a handful of gigs, mostly charity outings, every year.) Post-Dogmatics, Lehane played guitar and wrote songs with the Matweeds from 1987 to 1989. His band Hotbox was in the future.

He was also building his Canton-based plumbing business. It’s worth noting that most veteran rockers do not live by rock alone. If they never made it big in their youth and still love to play, chances are it’s something of a sideline now. Lehane, who’s 59, is a big Bruins and Red Sox fan and he picks a baseball analogy, viewing his place on the rock ‘n’ roll spectrum like a baseball player in Single A.

Lehane’s sound and inspiration have remained the same over the years. “It’s the garage rock sound that has resonated with me - early Kinks and Stones, Chuck Berry, Them, ? and the Mysterians. Not every note is in the right place. It’s rough, but warm.”

As to the 1991 recording, it happened at the Cars-owned Synchro Sound on Newbury Street, as upscale a studio as Boston boasted. Jerry had met and become friends with sound engineer Tom Hamilton - no, not Aerosmith’s Tom Hamilton- who’d done some recording with the Lemonheads and worked at Synchro. So, Jerry got an afterhours deal: He and his pals would come in at midnight and for short money.

“I had these songs and handpicked musicians I was friends with around Boston,” Jerry says. “They all came in and did it for nothing. I knew they were good songs, but the songs never got out. I didn’t shop them around.”

You’ll hear some rowdiness on the record, but it was not a wild free-for-all session with copious amounts of booze flowing. “We did it pretty quickly,” Lehane recalls. “Recording sessions are pretty boring. It’s work. You pull up the car, you go in at midnight, you shut the door and the outside world goes away.

“Everyone was in a great mood to play and learned the songs right there in the studio, which is pretty difficult when the clock is running and you don’t have money. You don’t record in the same room together and the drummer is all by himself. It takes a while to get the feel, but once we got it down, it went pretty good.”

“When Charlie came in it was a big deal,” Lehane adds. “We were all friends that hadn’t seen each other for a while, and it was especially cool with Randall and Charlie, who’d played together in Scruffy the Cat.

Charlie made the room more upbeat and happier.”

Songwriting motivation is always an interesting topic and Lehane says, “Three of them – ‘Runaway With You,’ ‘All I Can Do’ and ‘Kiss My Tattoo’ - I wrote in response to being dumped for the first time.”

The mid-tempo, twangy “All I Can Do” begins with “You were the best I ever had/I can’t believe we didn’t make it last” and by the refrain Lehane’s singing, “All I can do is think of you.” At the end of it, he’s going on a trip, getting drunk every night and sleeping all day.

“Kiss My Tattoo” is more garage-rock fierce and furious, ragged but right. If the odious Ted Nugent hadn’t used the phrase as a song title, I’d almost call it “sweet revenge.” Lehane’s in a bar and while the guitars are blasting, this babe tells him “Kiss, kiss my tattoo” and, bang, just like that “And I forgot all about you!” That ex? “It was the devil in the flesh that got me in this awful mess,” he sings.

“I purged myself,” says Lehane. “At this point, I was living in Jamaica Plain, between bands and writing quite a bit.” (Ultimately, “being dumped” was not a bad thing, either artistically or relationship-wise. Lehane has been happily married to his wife, Jeanne, for 22 years and the couple has a daughter, Grace, and a son, Owen.)

“Feel Like Dying,” however, was inspired by Lehane’s reaction to American soldiers going to fight in the Kuwait war. It sounds breezy enough, Nick Lowe-like, but the protagonist is weighing his tour of duty: “Maybe I’ll come back/Maybe I won’t.” It was produced by Chesterman, who also sang background vocals. (Chesterman, who sang at the Lehanes wedding, died 22 years later at 53. Fuck cancer.)

But you’re probably wondering, as we started this little essay with a Beatles reference, how is Jerry Lehane’s solo debut like the Beatles?

Remember how the Beatles sometimes left (inadvertent?) mumbling asides in the songs? Like John Lennon either said “I’m very bored,” “Cranberry sauce” or “I buried Paul” at the end of “Strawberry Fields Forever.”

In “Runaway With You,” Lehane says, “At the very beginning. as we’re starting to roll the tape, we must have had a mic going and Charlie looked up and said ‘There’s carpeting on the ceiling!’ He was amazed by it and it rolls into the song at the beginning.”

Indeed, it does! And the song is kinda Beatles-esque poppy.

It’s a hopeful, joyous, jangling song where Lehane sings “I don’t want to be that way anymore,” and wants to resolve situation via the words in the title and chorus. He wants to run away with that elusive you, that girl of his dreams.

"Runaway With You", "Feel Like Dying" and all I can do produced by Charlie Chesterman
"Tattoo" and "Fish" produced by Jerry Lehane and Tom Hamilton

All songs recorded and engineered by Tom Hamilton @ Synchro Sound