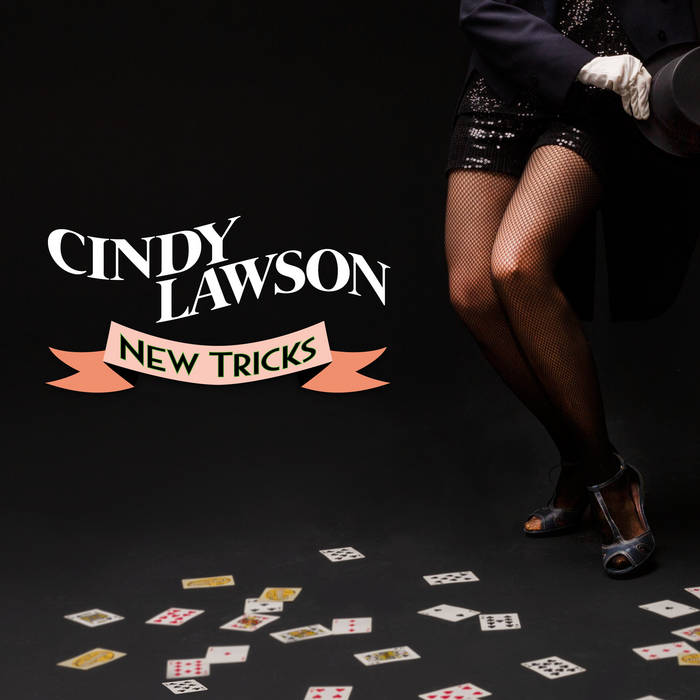 "What a voice Cindy Lawson has!" - Lord Rutledge

"Cindy Lawson's 'New Tricks' showcased a hugely confident vocal curl on a range of power pop bangers that came with a strong root in mid 60s melodies. The album suggested that she was back in a very big way." - Real Gone

"New Tricks revisits childhood influences from girl groups and glam rock, and filters them through the lens of experience and nostalgia. “How It Feels” kicks off the short album with a rocking reminiscence of the teen years, and Lawson keeps looking fondly back on the wistful “Dream Baby” and late singer/songwriter Lori Wray’s wry “Nope.” But she’s still got her feet planted in the present, as evidenced by the rootsy “The Devil’s in the Details,” the power popping “I’m Not the Only One” and the angrily rocking “I’m Loaded” and “Let’s Pretend.” Maturity has been good for the Lawson muse – if anything, her songs are sharper and her vocals stronger now than in the heyday of the Clams. New Tricks may be slightly ironic – there’s nothing here musically that couldn’t have been predicted by her Clams oeuvre – but Lawson is doing it better than ever, so new ain’t as important as fresh." - Big Takeover Magazine

"Sixties Girl bands, Seventies Powerpop, maybe even a bit of Glam-rock along the way. Her voice sounds so strong, hitting all the right notes at all the right times, while the guitars effortlessly switch from one style to another, from delicate refrains through to hard-edged rock. This is music that should be on the radio-waves, or suddenly grabbing your attention as part of the soundtrack to a Summer blockbuster…" - Fear And Loathing

"Pop 60's, Rock, Girl Group, Glam… and so many other things. In the end on this album we don't recognize any of these inspirations, we only discover Cindy Lawson as in herself with 9 songs that hit the mark, and a handful of which would be in heavy rotation on all the radios of the planet (well in a perfect world). Essential!" - Voix de Garage Grenoble

"Within the first 30 seconds of my first contact with "How It Feels," her voice had sent chills down my spine. You can go back and listen to The Complete Clams or the Whoops Kitty album and hear a young talent of tremendous promise. After a long period of semi-retirement from the music biz, Lawson is back to completely fulfill that promise. To these songs, Lawson has brought decades of experience in life and music. And her songwriting skills clearly never left her. The well-named New Tricks incorporates many of Lawson's long-held influences (such as '60s pop and girl groups) while still sounding fresh, original, and modern in the year 2022. The album was superbly-produced by Steve Price (of the excellent '90s Twin Cities band Rex Daisy), who knows a thing or two about what a rocking pop record ought to sound like. From the crunching pop-rock of "How It Feels" to the sultry bounce of "I'm Not the Only One" to the garage rock inspired thump of "You've Got Quality" to the girl group majesty of "Dream Baby" to the hard-rocking grit of "I'm Loaded," this album covers a lot of ground without ever having to veer too far from the timeless structure of the three-minute pop song." - Faster And Louder

“Love watching Cindy Lawson be herself in fishnets and looking girly while rocking out songs with a retro bad girl sound and a message that recognizes and empowers the good and bad girl in each of us.” - Ann Treacy, Mostly Minnesota

"Listening to the fabulous New Tricks, one might be tempted to curse the music gods for depriving Cindy Lawson of the stardom she so deserved. But who says it's too late? Far from a post-script on Lawson's musical career, New Tricks represents its rebirth. It's the work of an artist whose best days still lie ahead of her. She's got wisdom, she's got talent, and she's got that voice. All over the world, people are hearing tracks from New Tricks on underground radio shows and saying, "Wow, who is that?!" Malibu Lou spoke to me earlier this year about how blessed he is to work with some of the best singers out there today. He mentioned a few names in particular (Shanda Cisneros, Miss Georgia Peach, Jen D'Angora) which I absolutely agreed with. I must add Cindy Lawson to this select group, and I am sure Lou will concur!" - Lord Rutledge

"Cindy’s music, like that of every great rock ’n’ roller, can make you feel powerful and cool, a little cooler than you actually are, and also that you ain't alone if sometimes you’re sad and angry and uncomfortable and unsatisfied. She has larger concerns than guitar tone, but not so large that she won’t, you know, get the guitar tone right. Her band pulverizes when they need to and ferries across the Mersey when that’s the ticket, and Cindy sees and hears for miles, the whole Ronnie Spectrum. Steve Price produces very well, which is kind of unfair ’cause he also plays bass and sings really well. Speaking of: Cindy can sing it snarly and she can sing it sweet. She writes smart words and tunes and includes one song by our mutual friend, the late, great Lori Wray. A moving tribute. What’s more, through her model as a musician and through her words in and out of song, she’s helped challenge and prod this sexist music biz and/or scene to be a little more equitable, a little safer, a little more accountable, a little more representative." - Dylan Hicks

"Fading in, and fading out and back again at will, “How It Feels” is a risky neat trick with a deliberate rock song at the heart of an angular jumble. It doesn’t so much demand attention, but rather claws it from you whether you like it or not. Chances are, though, that you will like it. The pieces are gutsy and fired up, and reflect someone who sounds fed-up with their surroundings, and yet hopeful of what is to come." - Youa Vang, The Current Minneapolis

"I had no knowledge of the music of Cindy Lawson. Thanks to Rum Bar Records that changed and I was hooked after hearing the new single, "How It Feels". Looking forward to the full length..if it's anything like "How It Feels", I know how it's going to sound and that's great!!" - Skybar Rising, WMFO

"How It Feels is all about loud, huge riffs and a mean rhythm section. Adding it all up it spells excitement. If How It Feels signifies Cindy Lawson's return to rock and roll, the world can only welcome her warmly." - WoNo Blog

Cindy was fed an early diet of 60's pop as a result of her older siblings' record collection-the Beatles, the Supremes and the Ronettes were constantly on the hi fi growing up. As she grew older, she'd hide under the covers at night with the AM radio tuned to the far away WLS Chicago station where Bowie, T-Rex, the Stones, and the Sweet kept her adolescent imagination fired up and she dreamt of being - not the girlfriend of the rock star - but the rock star herself. Her 80's band, the all-female Clams broke a few barriers and a few hearts in the Minneapolis indie rock scene before disbanding in 1989. To their great surprise, their recordings are now re-emerging to rave reviews nationally and internationally and Cindy herself has regrouped with a new band that's energized by her early influences and the pure joy of playing to live audiences again. The first song on the album "How it Feels" captures the exuberance and freedom of the teen years as seen by someone reliving the joy of finally escaping the oppression of self-doubt.

New Tricks, is a long awaited collection of songs written and performed by Cindy Lawson, who has the distinction of being both an important part of Minnesota music history and completely up to date as gifted vocalist and talented songwriter absent from the scene far too long. A veteran of the 1980's Minneapolis music scene, Cindy has returned to playing and performing and the "New Tricks" Full Length release is her first set of original songs recorded since the mid 90's. With influences ranging from the Ronettes to the Stooges to the Beatles, Cindy's songs are deeply personal pop delights.

Produced, Recorded and Mixed by Steve Price at Dream Hog Studio
All Songs by Cindy Lawson @ CINDYSONGS ASCAP
Except for Nope by Lori Wray @ 2000 Spitbite Music

The Hammer and The Relentless from the Boston band Malleus stop by for a chat.