by Nato Coles and the Blue Diamond Band 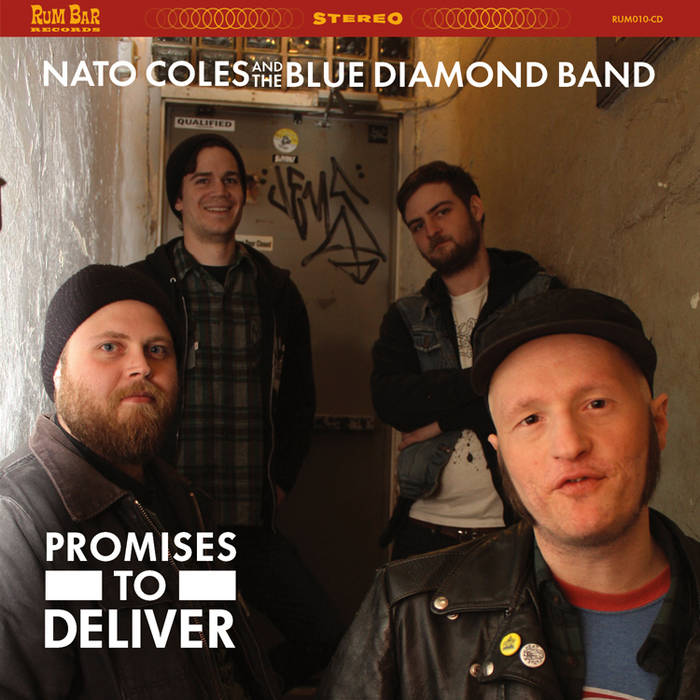 ERIC MCMILLER First heard this tune on the split EP on spotify... now I'm glad to own this track as it is SAH-weet. You should check this album out! Favorite track: High And Driving.

Play rock’n’roll music in a band in this day and age, without causing the ghosts of Phil Lynott and Joey Ramone to fall together
weeping in anguish in each others’ arms. They said it couldn’t be done. Bruce Springsteen placed a personal call to Nato,
imploring him to call it off. Stan Lynch stole the Blue Diamond Bands’ drums and hid them. Bob Mould and Grant Hart shook hands,
made up, then set BDB band members shoes and their touring Econoline on fire. Undaunted, Nato & the BDB persevered (and
added a keyboard player), and today, riding high, way high, upon Promises To Deliver, their lauded and applauded debut release...

Step up to the bar for another taste of the heartland!

Nato Coles has been a fixture of the American punk rock n' roll scene since the early 2000s. You may remember him from Milwaukee's beloved Modern Machines or his more recent bands Radio Faces and Used Kids.

He moved to Minneapolis in the spring of 2010 with a plan: put together a band that would fully realize his musical vision, and have a ton of fun with it while playing shows and making music and roamin' around in vans.
With Mike Cranberry, Kyle Sando, Bill Rohla, Luke De Beaumarchais, and Sam Beer, this goal has been achieved in spades (special thanks to original lead guitarist Ross Fellrath as well). Over the last four years, Nato Coles & The Blue Diamond Band have released one single, two split seven-inches, and the acclaimed 2013 full-length Promises To Deliver.

Rum Bar Records is proud to present an expanded CD reissue of Promises To Deliver - which supplements the album's nine songs with four seven-inch tracks, an unreleased number called "Pieces On The Ground", and a demo for fan favorite "Julie (Hang Out A Little Longer)". Inspired by the Midwestern punk of Husker Du & The Replacements, the great American rock n' roll of Bruce Springsteen & Tom Petty, and 1960s oldies and R & B, Nato Coles & The Blue Diamond Band are definitely kindred spirits to Rum Bar standouts like The Connection and Mono In Stereo.

If you like blue collar rock n' roll with the guts of punk, pop open a cold beverage and dig into stellar cuts like "See Some Lights", "Econoline", and "Play Loud". And with Nato and the fellas touring constantly, be on the lookout for a show near you. Guaranteed, you'll have the time of your life! - Lord Rutledge, Fall 2015