by Dany Laj and The Looks 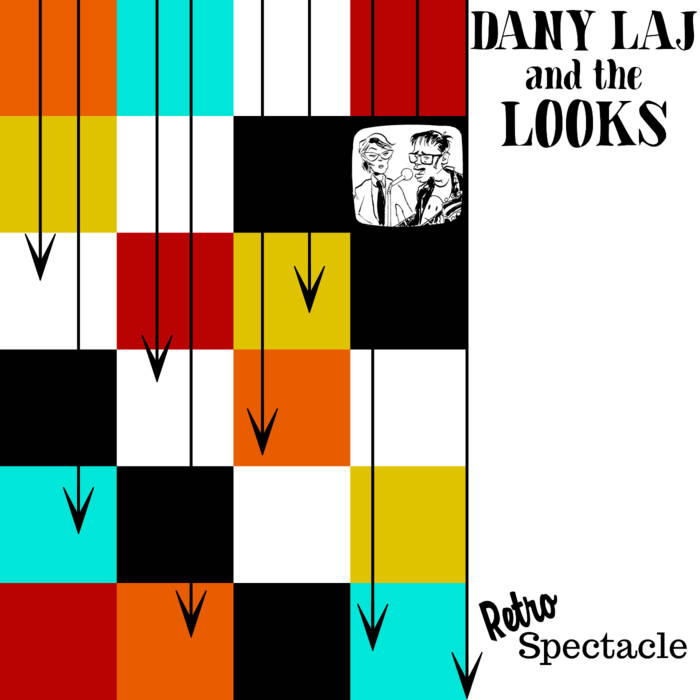 "Whether you're a longtime Laj supporter or just a fan of guitar pop with heart, RetroSpectacle is well worth your time." - Lord Rutledge

"If you didn't know this was a look back at the career of Dany Laj it would be hard to tell that it wasn't a brilliantly realised album on it's own merits. You can hear elements of the band's self-confessed Nick Lowe and Paul Westerberg influences but there's also an echo of I'm The Man-era Joe Jackson with a lyrical pop/punk edge to the honest tales of romantic tribulation." - Shindig!

"RetroSpectacle truly showcases Dany Laj’s talent for writing hooky guitar driven power pop, and there isn’t a song I don’t like on this comp. If you are already a fan, the renewed acquantaince with songs like Sweet Pretender (the first Dany Laj song I fell for) and Best Thing In Town will be a joy. If you are unfamiliar with these songs, I envy you for experiencing them for the first time." - Add To Wantlist

"In many ways, “Sweet Pretender” sums up the ethos. Combining Elvis Costello with a Wall of Sound 60s feel, that’s what this does so, so well. If you’ve been down with Dany Laj And The Looks since the start, hats off. If like me, you were a 2021 convert, or perhaps you’ve never heard him before? Then get on “Retro Spectacle”." - Maximum Volume Music

"Clearly a man with a plan from the beginning, Laj injects tremendous rock & roll energy into songs that range from introspective to romantic to humorous, just as he does in his later work. “You’ve gotta take this town to another town,” he insists on “Small Town Kid,” which is good advice for songwriters (and artists) everywhere who escape one place to find another. Meanwhile he and the Looks (bassist Jeanette Dowling and various drummers) kick out all kinds of jams on “Diamond in the Rough,” “Sweet Pretender” and “Left Right to One,” hook machines in high gear. Though constructed from multiple sources, RetroSpectacle maintains the same focus as the previous platter, thanks to the consistency of Laj’s sound and songwriting." - Big Takeover Magazine

"Dany Laj And the Looks are becoming a tour de force in the world of power-pop and old school rock’n’roll and deserve to be heard by a much wider audience. RetroSpectacle is the perfect vehicle to take them further on this uplifting musical journey so do yourself a favour and hitch yourself a ride." - Louder Than War

"What we like about Laj is that he has such a wide range of influences and the ability to color his songs with them at will." - Boston Groupie News

"I've been on the Laj train since 2017 and am pleased to find many of my favorite tracks here such as "Sweet Pretender", "Mister Screaming Attitude", "Hold For Love", and the terrific 2018 single "Left To Right One". I've also discovered a couple of old gems in "I Know You Want Out" and "Best Thing In Town" that have immediately ascended to my favorites list. While "power pop" broadly describes this band's music, I've always appreciated how Laj has never limited himself to a specific genre. He's a singer/songwriter first and foremost, and his songs reflect the influence of everything from punk to folk to indie rock to classic pop & rock and roll. There's more than a little Nick Lowe and Elvis Costello in his musical DNA!" - Faster And Louder

"Dany Laj writes the kind of tunes full of yearning: for love, for commitment, for purpose, for getting the hell out of town. Fortunately he wraps this angst in the kind of tuneful confections that make fast friends on one spin." - Big Takeover Magazine

RetroSpectacle: A retrospective career spanning from the garage to the van filled with hand picked, fan favorite, and long lost buried treasures of heartworn sleeve power, pop, personified (compiled for the first time) from Dany Laj and The Looks...

Songwriter Laj (Lajeunesse), born and bred in Kirkland Lake, a rural gold-mining camp six hours north of Toronto, is no stranger to being a small town kid growing up in a secluded northern town. Having toured the country and playing any stage he can find, Laj is now in the position to work out his own musical vision, and so far the results have been very exciting.

Dany Laj’s heartfelt songs seamlessly meld together elements of rock, folk, and country, without straying too far from the power-pop roots that give the tunes a certain joie de vivre, with nods to tunesmiths like Nick Lowe and Paul Westerberg. The narrative weaved together by Laj’s powerful yet unpretentious lyrics tells the tale of the Northern Ontario kid trying to find his way south, ultimately to Montreal, by way of Sudbury, North Bay, Toronto, and everywhere in between, with stories of finding love, cross-country tours, and broken-down vehicles, but ultimately retaining a strong sense of humour and hope which lies within memorably catchy hooks and intertwining harmonies between Laj and bassist Jeanette Dowling. Dowling and drummer Dusty Campbell as The Looks, Laj’s crack rhythm section, provide a rock-solid foundation and perfect complement to Laj’s quirky pop sensibilities, rendering Dany Laj and the Looks an unstoppable force just waiting to win your heart.