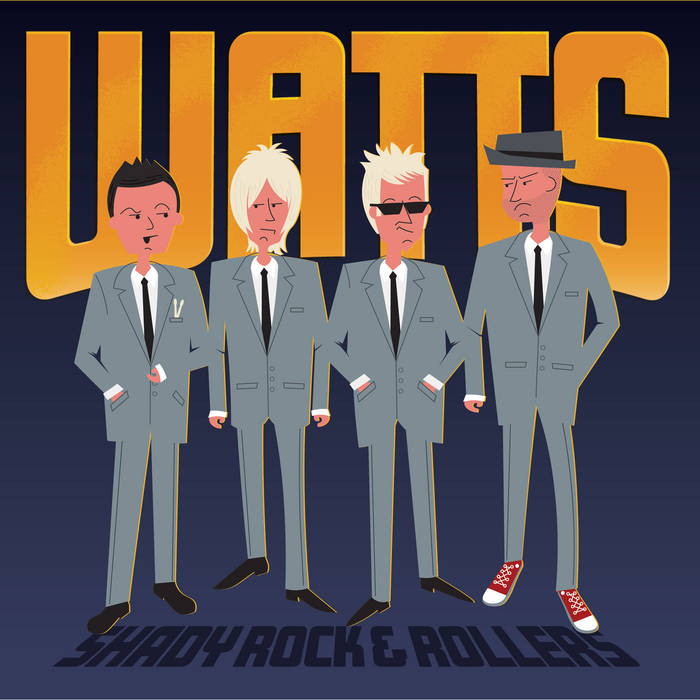 Rob Moss Because it's loud and fast, but hard and slow, it's how I want my rock 'n' roll. Favorite track: Loud & Fast.

"In the hands of Watts, rock & roll is most assuredly not dead." - Big Takeover Magazine

"Watts is most definitely not done with rock and roll and has just delivered another fantastic album redolent of a time when the likes of Cheap Trick, KISS, and the almighty Stones reigned supreme. Uninterested in fame and fortune, Watts makes rock and roll for rock and roll's sake." - Faster And Louder

"Boston’s local guitar heroes Watts are back with an album that turns it up to “11”." - Power Popaholic

"10 songs and not one to throw away !!!! In there is a big bunch of mini-hits from those who make you wake up every morning with the pole!" - Voix de Garage Grenoble

"Ten tracks in 32 minutes… which pretty much makes it a perfect album. The vaccines are great medicine but good old, kick ass rock and roll is by far a better tonic!" - Uber Rock

"They’ve appeared on the website many times over the last five years or so, usually with me saying things like “this is six minutes that reaffirms every reason you loved rock n roll in the first place” or something. Now, they are here again with “Shady Rock N Rollers” and, brother, it might be the best of the lot, frankly." - Maximum Volume Music

"‘Shady Rock & Rollers’ almost plays like a pretend “greatest hits” set. It’s a brilliant document of a band doing something they love; a band that knows their sound is timeless, and knows that a well played, tried and tested arrangement can often be more gratifying than any attempt at being flashy. It’s hugely indebted to a classic rock ‘n’ roll past, but it also cements Watts’ place as one of the best retro rock bands that most people outside Boston have never heard. Don’t miss it!" - Real Gone

"Boston garage rock ‘n’ roll veterans Watts are acting a bit ‘Shady’ on their latest single, with a chilled-out approach to garage rock n roll. Bluesy vocals merge with a capable band to make a song you can’t help but find yourself nodding along to!" - Uber Rock

"Watts sets themselves apart with their unique style akin to putting Bowie, Cheap Trick and Mott The Hoople in a musical blender and quenching the thirst for good time Rock ‘N’ Roll." - East Coast Rocker

“It’s WATTS happening! Crank it up with the pedal down!” - “Boris” Boden aka The 'Secret Weapon' Radio Show on Woody Radio

"It's the huge guitars and harmonies of Cheap Trick mixed with the swagger of the Rolling Stones and the glam of Mott the Hoople. It's just killer old fashioned (well, 1970's era) rock 'n' roll." - If It's Too Loud

"Heavy Metal Kids sets the standard for listening in the first seconds. Watts' introduction to its upcoming new album later this week does not beat around the bush. Solid rock all the way." - WoNo Blog

"None of these grooves lack power." - Pop Geek Heaven

Boston. Home to legendary household rock ’n’ roll names like J. Geils Band, Aerosmith, the Neighborhoods, the Real Kids, the Cars; and the city’s own namesake, Boston. Now, the legend gets even bigger when cocksure rockers/movers/shakers Watts return with their fifth full-length album. We’re sliding 10 brand new shots down the Rum Bar and into your ears.

A Danny The K Production

Recorded, Mixed and Mastered by Danny The K
Drums on Track 10 recorded by Sir David Minehan at Woolly Mammoth Sound