The Awful Disclosures Of Screeching Weasel 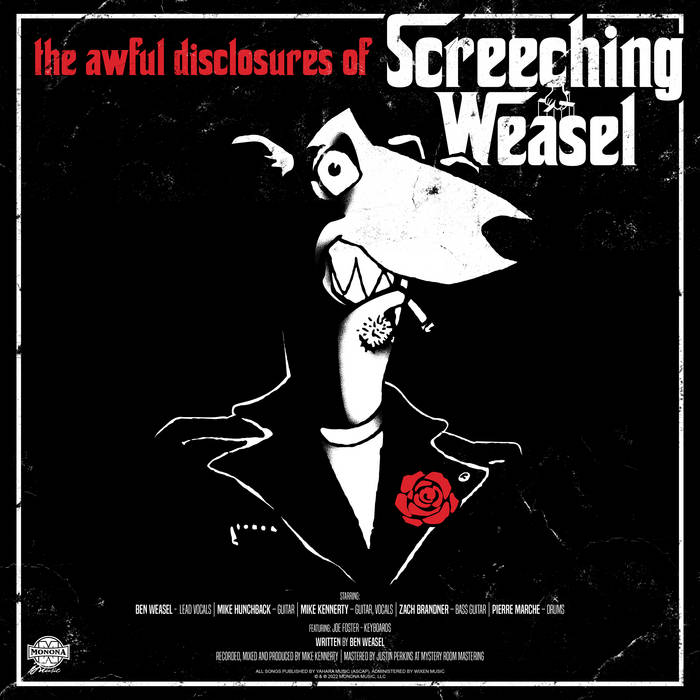 "Contender for Punk/Pop album of the year." - Radio Warfare with Tim Livingston

"On Screeching Weasel’s new album, ‘The Awful Disclosures of Screeching Weasel,’ the follow-up to 2020’s ‘Some Freaks of Atavism’ and their fourteenth (!) overall, we are treated 14 new slices of melodic punk rock chock-full of buzzing guitars and snotty vocals. Or were you expecting anything else from a Screeching Weasel album? Even after all these years, the power of punk rock is still strong in this one." - Punk Rock Theory

"These well-crafted tunes keep the listener guessing. That is the beauty of The Awful Disclosures of Screeching Weasel and one of the things that set it apart from the rest of their over three-decade long catalog." - PunkNews.org

"With elements of Pop Punk, early New Wave (and that's new for them, but a wisely exciting addition), Punk 77, Hadcore Melo... The voice is always highlighted by the instrumental setting which is more varied than usual, and with rhythms of pieces also more diverse! Which makes the impact of the album even stronger!" - Voix de Garage Grenoble

"With The Awful Disclosures of Screeching Weasel, the band’s fourteenth studio album, Mr. Weasel has proven once again why he’s still standing after 36 years in the music business. Creeping up on four decades in the game, Ben Weasel just keeps pulling rabbits out of his hat. Love him or hate him, you have to admit, the man’s staying power as a songwriter is quite impressive." - Dying Scene

"Screeching Weasel keeps things brief, bright, and hooky as the group continues to do their patented pop punk justice on The Awful Disclosures of Screeching Weasel." - Glide Magazine

"“The Awful Disclosures of Screeching Weasel” is the latest instalment from the oft copied, never equalled exponents of anthems for any generation worth their salt, a rare case of still ‘having it’ and being in total control of their own destiny. This one features Ben’s son Joe on keyboards here and there that adds a harmonic to the fray that really sets it apart." - The Next Big Thing

"Ramonescore punk pioneers’ latest album is a dependable release. Overall this is a consistent album that gets better after each listen coming from one of the most influential bands of our generation. If you liked the previous album, then this is a ‘must have’ in your collection. In fact, if you’re a Screeching Weasel fan at all, you will no doubt love this." - Punctuation!

"The “new” SW lineup (same as the previous album) delivers the chops as expected. There’s no mistaking Ben Weasel’s vocals, and when his melodies hit, they really smack it out of the park. “Any Minute Now,” “All Stitched Up,” and “Pandora’s Eyes” are a few more feathers in the cap for sure." - Jersey Beat

"Screeching Weasel showcase why they have been named such an influential act as The Awful Disclosures Of Screeching Weasel is a gold standard for what a punk rock record should sound like. Ben Weasel gives 110% with his vocals and the band responds behind him in perfect synchrony. This album will easily be one of the best pop punk records you will hear this year!" - The Fire Note

"I’m thrilled to know the band still has this many ideas after all these years—ideas they execute spectacularly to form an exciting traditional pop-punk record." - Dalt Disney

"I just picked this up Saturday (3days ago) and it’s all I wanted it to be. Screeching Weasel being Screeching Weasel…. No surprises (perhaps the vocal harmonies are sweeter). High energy catchy pop punk . Just as Ben Weasel has always done it." - Magoo McCormick

"This release by a band that has been what I would call the back bone of pop/punk for so many years, has them doing it all in much the same way, playing music that flows out like a volcanic eruption, scorching all that stands in their way. Diversity is the mantra of punk, and SW are the epitome of a band that creates album that ooze this, who knew pop punk could be so varied, and on one album." - The Punk Site

"Some of the songs are pretty great pop-filled punk rock music, some even harkening back to their early days with some hardcore in the sound. “Six Ways to Sunday,” the track that opens the album, is a reminder of what made Screeching Weasel the powerhouse of a band they were back in the day. It’s fast and loud, snotty melodic poppy hardcore. And it’s the best track of this new LP. Songs like “Any Minute Now,” "My Favorite Nightmare,” “All Stitched Up,” and “Dead or Alive” are more representative of much of the band’s later output. They’re not quite so edgy or snotty, but they’re still solid pop punk and enjoyable songs in their own right." - Paul Silver, Jersey Beat

"“Any Minute Now” is a bouncy tune about a suicide pact, that’s what it seems to us. A choice tune." - Paul Blowfish

"Screeching Weasel is a punkrock band from Chicago that knows how to keep a song short, tight and providing the elements that make it so nice to listen to." - WoNo Blog

"At this point, you know what you're going to get with Screeching Weasel. The pop punk/skate punk legends have their fourteenth album coming out, and have released the first single from it, "Any Minute Now." Does the song have that early pop punk sound where it's poppy but still rough? Yes. Is it still a little bratty? Of course. But what's unexpected is just how great this is. While most bands of this genre either overstay their teenage snottiness or slowly drift into a more mellow and mediocre sound, Ben Weasel has been able to sound older and more mature without losing what makes Screeching Wesel so beloved. "Any Minute Now" is exactly what Screeching Weasel should sound like thirty six years into their career." - If It's Too Loud

Chicago's Screeching Weasel provides a fierce soundtrack for the apocalypse with their fourteenth studio album, out Summer 2022. Relentlessly melodic and loaded with punishing hooks, The Awful Disclosures of Screeching Weasel reveals our deepest fears while encouraging listeners to twist and shout into the abyss.
A wicked salve sure to entice fans of melodic punk and high-octane rock alike, the 14-track banger arrives two years after the band's acclaimed 2020 release Some Freaks of Atavism secured frontman Ben Weasel's unorthodox punk rock legacy for a whole new generation. The songwriter is perched at the top of his game—locked, loaded and larger-than-life.

Featuring the band's signature combination of super-charged snotty vocals and fast-paced distorted guitars, fans can expect a fist-pump- ing ride as well as an innovative take on the genre Screeching Weasel birthed circa 1991. Let's not forget that the band defined an entire era of pop punk, predating next wave groups like Blink 182, Taking Back Sunday and Rise Against. These days, Weasel is still pushing boundaries and poking bears.

At times deliciously dark, sweet and dizzying, The Awful Disclosures rollercoasters listeners through the mundane, the miraculous and the macabre with precision and energy. Like all good thrill rides, there's more than a few surprises: Piano and organ accompaniments come courtesy of Weasel's son, Joe (Yes, you could say he is making his “independent label debut.”) The old Chinese adage, “may you live in interesting times,” comes to mind during this 31-minute tell-all. For Screeching Weasel, the curse is a blessing. No other time could have produced such a red-blooded record—and from a band who has died on the table too many times to count!