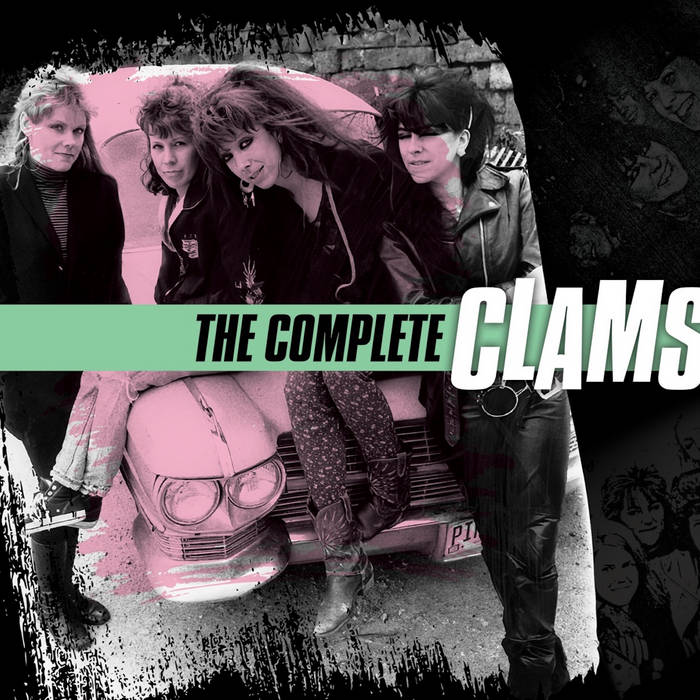 "Cindy Lawson was (and still is!) an absolute powerhouse on lead vocals. She and Roxie Terry formed a bad-ass tandem a la Jagger/Richards and Johansen/Thunders. It's no surprise, then, to hear the Stonesy vibes of "Run Baby Run" and a most formidable cover of the New York Dolls' "Human Being." What I enjoy about this collection is that it captures a very versatile rock and roll band. Whether you're a Minneapolis/St. Paul music scene historian or simply want to discover a really great garage rock and roll band that has gone largely unrecognized for decades, The Complete Clams is a highly recommended purchase." - Lord Rutledge, Faster And Louder

"The original Minnesota Clams were a great vehicle for garage rock riffs and massive hooks. A lot of people have only really caught up with them via the Rum Bar Records compilation ‘The Complete Clams’ (issued in May 2022), but it’s clear that decades after they disbanded, The Clams were a band with a huge potential. At the very tip of their musical iceberg, ‘He’s Like Heroin’ presented them like a huge-voiced, female fronted Stooges; ‘Give Me A Reason’ served up sixties garage pop loaded with bubblegum sweet melodic hooks and ‘The Dangerous Kind’ showed them dabbling with something much punkier, but with equally cool results. The Clams were a band that often sounded great, no matter what." - Real Gone

"Ms Lawson fronted the renowned Minnesota all-girl group The Clams during the mid-Eighties. They played a style of guitar-based pop that sounded like a cross between the Bangles and a street-gang… lots of great melodies and plenty of attitude!" - Fear And Loathing

"Considering the embarrassment of riches that was the Minneapolis alternative rock scene in the eighties and nineties, it was inevitable that some cool acts would get lost in the shuffle. Enter the Clams, a hard-nosed quartet led by singer Cindy Lawson and lead guitarist Roxie Terry that drew more from the Stones, Chuck Berry and Detroit than Big Star or the Buzzcocks. While the band can certainly sweeten up when they want to (cf. “Give Me a Reason,” “What’s Wrong With This Picture?”), they’re more comfortable with rough ‘n’ tumble rockers like “Eat My Words,” “Crazy Boys,” a gleeful mugging of the Who’s “Squeeze Box,” and album opener/calling card “Run Baby Run.” “If you don’t want me, you can find yourself a saint,” Lawson sneers on a cover of the New York Dolls’ “Human Being,” which sums up where this sadly short-lived band was coming from nicely. As billed, The Complete Clams compiles everything the band recorded during the Reagan years: demos, singles, covers, comp tracks and the contents of their 1988 Exile on Lake Street EP." - Big Takeover Magazine

"Musically, the Clams practiced a kind of 'historic channel' Power Pop (obviously) in the American style, with strong Rock'n'Roll connections (a bit like the New York Dolls). But this beautiful collection of songs is also mixed with a bit of Blonde Pop, a tiny touch of Paisley Underground, a bit of innocent Indie Rock from the end of the 80's, a bit of Jangle Pop... And it goes without saying, but it always goes better saying it with a perfect dusting of Girl Group! It's beautiful and delicate, muscular and harmonious... enough to make your sensitive Rocker heart vibrate for a long time!" - Voix de Garage Grenoble


Tougher than the Go-Go’s or the Bangles. More melodically savvy than the Pandoras or Babes In Toyland. Independent and self-directed, unlike the Runaways, but just as “Cherry Bomb” hot. Ladies and gents, the Clams were a real rock band, a bit raw and mighty tasty. They coulda shoulda woulda been at least cult stars. The evidence is in your mitts.

Opening with a bang, “Run Baby Run” sounds like the Stones after gender reassignment. Chryssie Hynde would have been proud to add “He’s Like Heroin” to her million-selling songbook. Rescued from a forgotten compilation LP, “The Desperate Kind” delivers righteous, giddy punk-pop. If “Give Me a Reason” is both tender and insistent, “Eat My Words” makes being angry sound downright gleeful. “What’s Wrong With This Picture?” should appeal to Kinks fans. “Train Song” keeps a-rollin’ mightily. “Crazy Boys” presents the fun and follies of fandom, with a dollop of Chuck Berry “Little Queenie” licks – nice.. And with its guitar pyrotechnics, sexual innuendo, and big, bruising beats, “Let Me Drive” is one hot ride – Beep beep’m beep beep yeah!

The one “official” cover track, “Human Being,” is terrific. These Minnesota gals – Cindy, Roxie, Patty and Karen – could stare down the New York Dolls in a dark alley, no lie. And the line about a “plastic doll with a new coat of paint” has never had more resonance. A rejuvenated, back-in-the-bars Cindy Lawson has lately been reviving the beautiful, ballsy ballad, “Sad Times,” with her current band. And 36 years later, it still sounds great. It was composed and produced by Nic Santiago, himself once a local bar star with Babylon Pink, and The Form. Some record collectors will no doubt spot another kinda famous name in the producing and engineering credits. Mark Freeman, the main man of NNB, helped these songs sound so fresh even today.

And then we have the unearthed cover tunes, what a happy hoot! “Squeeze Box” is more explicit and more silly than the original, no mean feat. Karen Cusack goes wild on her drum kit, perhaps channeling a loon named Moon. I do miss the banjo, though. Dour Lou’s classic, “Sweet Jane,” gives you a real flavor of what a night in the bar with the Clams was like. Can’t remember a bad one. “We’re an American Band” proves to be a pretty good song, even without Todd Rundgren’s studio magic. It’s as far removed from glam rock and punk as another curve ball, “Folsom Prison Blues.” A salute to the Man in Black, by the women most often in black themselves, it’s a reminder that our Clams once played a noteworthy gig at Stillwater Prison.

On my wall for several decades now, there’s a framed “Exile on Lake Street” poster of The Clams. To which every band member added a personal Sharpie note. Guitarist Roxie Terry wrote, “Tom, Thank You! Thank You! Thank You! I will give you my first born… Love, Roxie XX” Still waiting…

When it came to 80s indie rock one of the best places to live was the Minneapolis/St. Paul area, aka the Twin Cities. It seemed as though the center of the rock music universe was there from Husker Du to the Replacements, the artist who was then known as Prince, not to mention the second wave of bands such as Trip Shakespeare, the Jayhawks, and the Gear Daddies. But for all these fairly well-known aggregations there were bands like The Clams who were wonderful, rocked like all get-out, and only briefly had their day in the sun. But what a day it was.

Led by vocalist/guitarist Cindy Lawson, the Clams were a throwback band: no arty pretense, no self-conscious alternative rock posing, they liked the Stones, MC5, and the New York Dolls (they even covered the Dolls' "Human Being" on their lone record) and wore those influences on their collective sleeve. Had they recorded in the 90s they might have been called riot grrrls and gotten a little more attention, but such was not to be and the Clams were better known as contenders who never got the break they deserved. Live they were sensational, with Lawson exuding pure attitude and lead guitarist Roxie Terry (the coolest rock chick ever!) striking an alluring Joan Jett-ish pose that made her a rock goddess come to life. Maybe they weren't hip enough, maybe they were not "cutting edge" enough, who gives a rip, the Clams were local heroes, a great band that liked to powder their noses and kick some ass. -- John Dougan