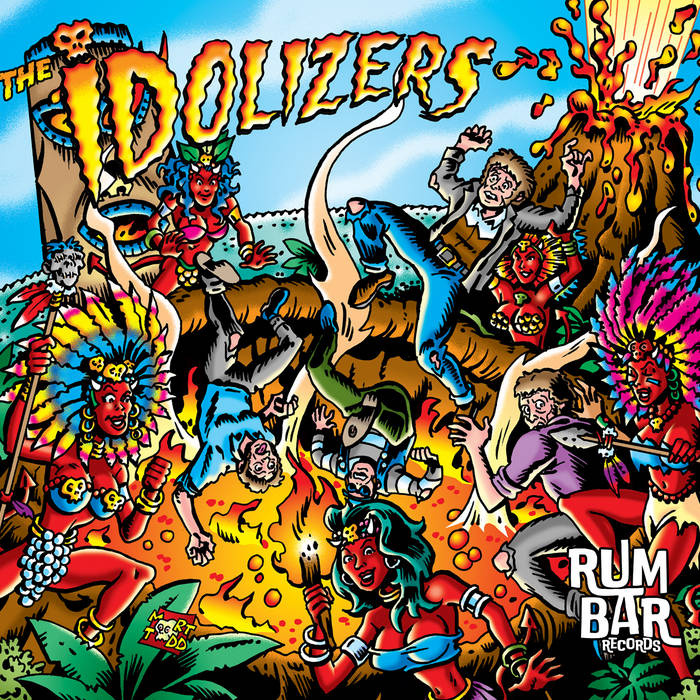 "Four tracks from this New York based Hi-energy rock’n’roll band. Just let yourself think of the MC5 re-assembled via The Heartbreakers, possibly with hints of The Boys and, more recently, The Briefs." - Fear And Loathing Fanzine

"Loving The Idolizers and the bargain package will be my Christmas present to ME! Keep it up LAMF" - loyal fan and estimable customer, Tom

"Alright kids lets turn it up and grab your favourite tennis racket lets go. make sure you’ve got the full length mirror at the ready and you’ve greased back your hair and set the time machine for the late ’70s when NYC was churning out sleazy rock and roll by the dozen and the Heartbreakers ruled the roost. Well I guess The Idolizers remember that time and remember how the high energy Rock and Roll made them feel which is why straight from the off the go for the throat with ‘Stranded’ “New York City’s The Idolizers are drenched in that period of punk rock and Roll and this four-song debut EP pulls from garage and glam to that early punk and rock." - Dom Daley, RPM Online

"You know its going to be ace from the opening. “Stranded (Again)” even starts with a solo sounds so ready to fight its got the Stooges in the back alley ready to rumble, and that’s kind of the vibe throughout." - Maximum Volume Music

"Embodying the spirit of The Stooges and New York Dolls, The Idolizers still maintain their own infectious punk/garage/glam sound. These real deal punk rockers hit us from every angle with soaring vocals, crunchy riffs, blistering leads, and thunderous percussion. There’s no doubt you’ll have your stereo cranked up to 11!" - Uber Rock

"It's like all my influences thrown into a giant mixing bowl!" - The Ledge, Real Punk Radio

"...the most excellent Idolizers who have their debut album ready to go in August but first we have this taster in the shape of ‘Stranded’ and what a snotty jet fuelled rocker it is." - RPM Online

"I was instantly in love with the gritty taste that is The Idolizers. The nods to all of the punk greats before them is clear but you also get this taste of hidden glam-rock. This opening track is straight power chord and driving drums with gang vocals and a prominent lead vocalist. Garage rock at it’s best." - Girl At The Rock Shows

"New York City’s The Idolizers revel in rock and roll. This four-song debut EP pulls from garage and glam influences, with a dash of early punk and hard rock. The interestingly titled “Exile on Pain Street” is a nod to The Rolling Stones, one of the clearly apparent influences on this band." - Jersey Beat

The Idolizers are true believers in Rock and Roll.

Rummaging around the ruins of 50's Rock n Roll, 60's garage, 70's punk and glam, like a miner panning for gold among the dustbins of history, they come blasting out of New York City with the kind of hook-filled tuneful punk you haven't heard in a while. Conjuring 77 Punk, 78 PowerPop, the dirtiest Raw Power Stooges. MC5, Heartbreakers, a dose of glam and the pop songwriting sensibilities of the Raspberries meets the early Who.

Featuring a few grizzled veterans and a few fresh faces with deep roots in NYC and New Jersey Punk and garage rock.
The Idolizers wear their hearts on their sleeves and their switchblade combs outside their pants. Too tough to die, too hip to be controlled, too streetwise to be controlled....Forever in thrall to the Idols on our wall, The Idolizers!

Album cover, art, design & layout by Mort Todd (Back From The Grave, Cracked Magazine, Tales From The Crypt)

All songs written by Mike Dee(Mehl)
All Rights Reserved