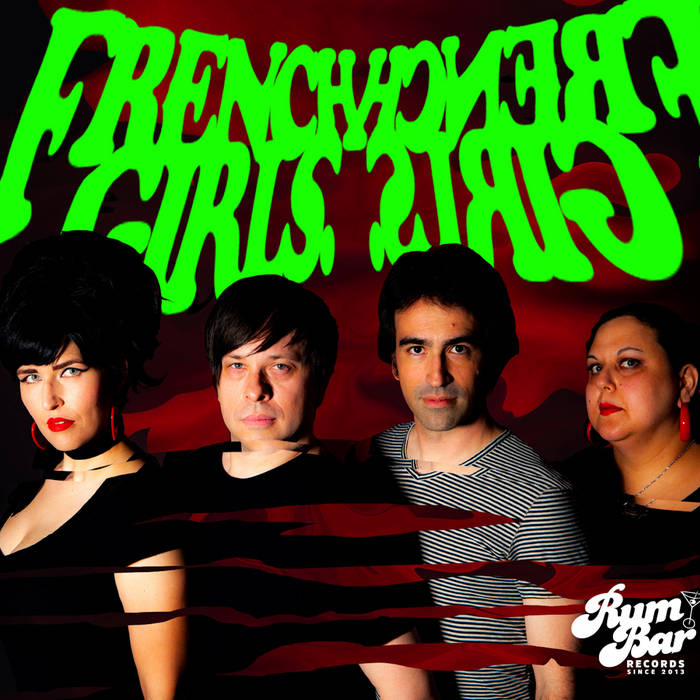 Garage Pop from the Desert.

"That French Girls album doesn't have a weak track on it." - Bill Kelly's Blackhole Bandstand, LSUG

"Ramones-style Punk, Sixties Garage rock and vintage Girl bands (Shangri-Las etc) all come together with a generous helping of attitude and adrenalin to make this a highly infectious blend of melodic punk rock." - Fear And Loathing Zine

"There’s 10 songs here and it’ll take up about 20 minutes of your time. And it’ll be about double your daily allowance of sugar. “French Girls” is an album that could only have come from an American band. Its cocktail of bubblegum, Spring Break, the prom, garage rock and attitude, though will resonate wherever people like tunes – and have a pulse, because if this doesn’t make you want to move then you are probably dead anyway." - Maximum Volume Music

"This record is so great." - Scott Hudson, The Ledge Real Punk Radio

"French Girls dig their guitars loud, their melodies sweet, and their rhythms pumpin’ on their self-titled debut. Sounding like they discovered the Clash and the Grease soundtrack in the same summer, the band knocks out rollicking sweet ‘n’ sour nuggets like the giddy “Summertime,” the confident “Independent Woman” and the lustful “Aerobicise” like they ingested a dozen caffeine bombs before every writing session, let alone performance." - Michael "Denim" Toland, Big Takeover Magazine

"Making good on the rough and ready promise of the earlier EP release and subsequent digital singles, this LP sets up French Girls in place one of the great garage bands. With ten no nonsense tracks packed into a speed driven twenty minutes, this is a disc that doesn’t let up. From the first notes to the last, these guys are set to clear the cobwebs; ready to shake your foundations and give you a good time." - Real Gone

"Party time in garage rock land. Six words are all this album needs, really. French Girls is all enthusiasm, all energy and all fun." - WoNo Blog

"The modern-day garage scene is sorely missing more bands like this, and I will gladly deign to cliché and call this album a breath of fresh air. "No Morals" is an instant garage punk classic. "Summertime" merits permanent placement on your "essential summer songs" playlist. These ten tracks always fly by in what seems like a flash, and then I just push play and re-start the fun! If you, as I, fondly recall the late '90s/early 2000s heyday of garage punk, this debut long player from French Girls will be music to your ears." - Faster And Louder

"Punky-pop with hints of Glam and Garage. Think of a cross between The Epoxies, New Bomb Turks and The Muffs and you may get close to what these guys’n’gals are doing." - Fear And Loathing Zine

"In garage punk terms, the 'French Girls' EP is a must-have." - Real Gone

First full length from Phoenix, Arizona’s French Girls. Led by Che Beret, formerly of Les Hell on Heels (Bomp!/Dionysus) and The Peeps (Sympathy for the Record Industry), the 2 girls and 2 guys have a garage rock sound routed through classic 60’s underground and the punk rock of the 70’s. Prior to the last years shut down the band has spent years perfecting a sound and playing a blistering live set along with bands such as King Tuff, The Love Me Nots, Screaming Females, Mark Sultan, Kepi Ghoulie, Kid Congo, Holly Golightly, Death Valley Girls, LA Witch, Hinds and more.

History:
Chela(Che) previously played in Hell on Heels who put out two records, one on BOMP! and one on Dionysus.
The Hell on Heels single, “Ain’t So Cool” was a “Coolest song in the World” and was on V5 of the compilation series. “I’ll come Runnin’” off their second album was also heavily featured on The Underground Garage.
They were also featured on Rodney on the ROQ
Their song “C’mon Turn Me On” was featured in HBO programming.
Prior to that, her band, The Peeps put out several 7” singles and one full length record on Sympathy for the Record Industry.