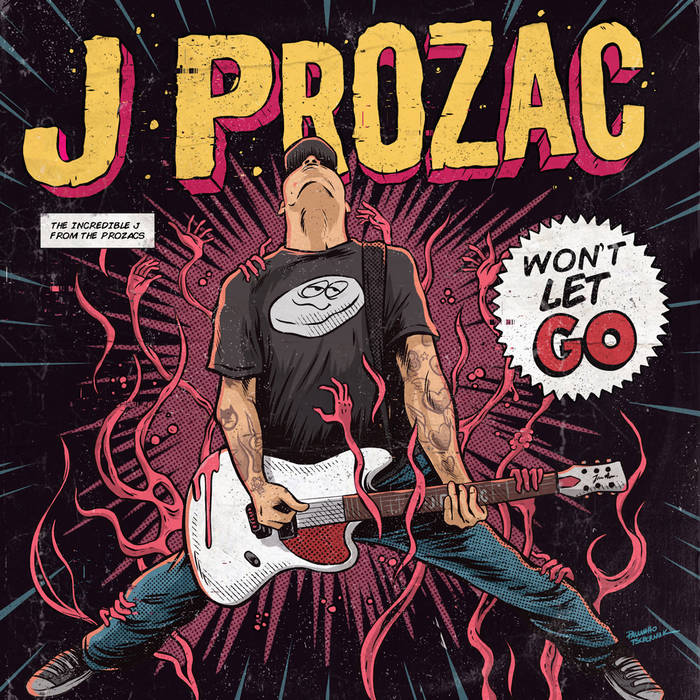 "Nobody will ever question Jay Gauvin's ability to write a perfect pop-punk song. But on Won't Let Go, he broadens his musical approach without straying too far from what he does best." - Lord Rutledge

“That’s a good disc, you should check it out.” - Bill Kelly’s Blackhole Bandstand

"Within its eleven songs, Prozac steers through punk and pop punk moods with ease, takes in some ragged heartland rock, and has even been unafraid to chuck in a ballad. With the help of massive hook after massive hook, J hits the mark pretty much every time – and there are even instances where the material is great enough to rival ‘Building Blocks’ in terms of that all important memorability factor." - Real Gone

"Many claim that pop punk and Ramonescore suffer from depth conceptually and lyrically. I feel that J Prozac smashes that while opening his heart and emotions through his songs. This album takes you deep into those things that make Jay happy as well as stay awake at night and everything in between. This album stands well on its own outside of the Prozacs catalog. Any fan of 90's style pop punk or his previous efforts should give this a listen." - Punknews.org

"Add a truckload of energy and the fun of playing this kind of music and you have a winner called 'Won't let Go'. "Whoa-hey-ho". So, how does the album fare? I haven't heard a better punkrocking album in 2022 yet." - WoNo Blog

"This is pop punk on steroids. Everything is pumped up. The arrangements are more complicated than you would expect from simple pop punk. There’s more change ups, the backing guitars sound layered, the busy drums are full of life, and the accompanying riffs are sharp and weave their way through the songs. J Prozac has been bringing the goods for years. This one is a topper!!" - Boston Groupie News

"Prozac knows how to build up a punkrock song of near epic proportions." - WoNo Blog

"Won't Let Go affirms once again that "grown-up" pop-punk is an actual thing and a thriving one at that. From Jay's heart straight to yours, this is the very definition of meaningful music." - Faster And Louder

"J Prozac have put together the ‘Building Blocks’ of a rather catchy number in their new power-pop-punk effort, showing all the fun associated with the genre while being a really well-written earworm." - Uber Rock

"It’s a vibrant record full of energy, melody and diversity. Prozac effortlessly goes from full ramonescore (People I Know), to bubblegum pop punk (Regret, Building Blocks), to a ’90s Fat Wreckish sound (Won’t Let Go) and everything in between. By covering all these different bases, Won’t Let Go will be an absolute joy and throwback to the ’90s punk crowd. To newer fans, Prozac provides a masterclass in how writing great catchy pop songs and sounding punk are not mutually exclusive." - Add To Want List

“J Prozac does indeed wear his heart on his tattooed sleeves. An amazing ode to Dan Vapid, one of Pop-Punk‘s forefathers and truly one of the best in the genre. What’s not to love, mentioning ‘Riverdale Stomp’ while exploding right out of the gate! Crank this one up…and then some!” - “Boris” Boden (The Secret Weapon on Woody Radio)

"Another cracking release on Rum Bar!" - The Ice Cream Man

"J Prozac is the latest Rum Bar artist to rip the packaging off his “Building Blocks,” and it’s a wonderful thing." - Powerpop aholic

"Can't wait for this album, because it's gonna be so sick!" - loyal fan and estimable customer, Randy Ray Jr

"In just under three minutes, J makes “pop punk 101” seem both inspiring and vital again. In terms of pop punk and Ramonescore, this shows J on the cusp of making and releasing some of the best music of his career to date." - Real Gone

"It's a monster hit! "Building Blocks" is heartfelt, profound, and massively catchy. This, my friends, is grown-up pop-punk done to perfection. Add another selection to the "albums I can't wait to hear in 2022"!" - Lord Rutledge, Faster And Louder

"Prozac is synonymous with quality pop punk and like Rum Bar he can be prolific. He never seems to miss that sweet melodic spot in all his songs." - Boston Groupie News

"The terrific J Prozac (of The Prozacs) has a new single available through Rum Bar Records. The song is called “Building Blocks” and it’s astonishingly catchy." - That's Good Enough For Me

J Prozac, frontman for long running New England luminaries The Prozacs and The Grand Prixx before then, along with being a veteran of the road both performing and road dog has expanded his pop punk roots into power pop, heart-worn sleeve heartland punk & garage rock while still keeping the big hearted ‘whoa ohs’, snotty vocals and powerful punk rock guitar riffs of his former bands in check. It's a memoir, diary, and photo book of lost but not forgotten moments, anthemic pop-punk, garage and power pop, musically it’s something for everyone and lyrically it’s like an autobiography of the different aspects, family and loved ones in J’s life.